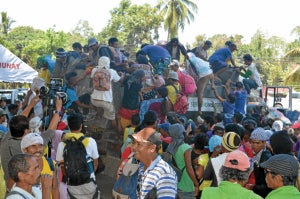 Farmers who barricaded a highway in Kidapawan City, North Cotabato, to demand for food aid from government, board the truck that will bring them home after they received rice donations from celebrities and private groups. Photo by Williamor Magbanua, INQUIRER Mindanao

SAN PEDRO CITY, Laguna — Several groups of photographers and artists have committed to helping farmers displaced by drought and have resorted to different ways of selling their photographs and artworks to raise funds for a feeding mission in Arakan Valley in North Cotabato province.

Instead of bringing sacks of rice to the farmers, a team of seven volunteers is headed to Mindanao later this month to set up a community kitchen and serve hot meals for farmers, who are victims of drought.

The group aims to prepare 1,000 meals a day in a two-day mission.

“We feel like [giving them] sacks of rice is a bit ‘old school,’” said photographer Alex Baluyut, who founded the Art Relief Mobile Kitchen (ARMK) in 2013.

“Remember that the concept of art relief is to show our care. [Hot meals] add personal touch [to the relief mission],” he said in a telephone interview on Thursday.

ARMK is a group of volunteer artists and individuals that mobilized a community kitchen at the Villamor Air Base in Pasay City for the survivors of supertyphoon “Yolanda” in 2013. It also held feeding programs in Hernani town in Samar province, and on Bantayan Island in Cebu province when these areas were hit by the typhoon.

At the same time, Baluyut said, feeding missions would allow artists and freelance photojournalists to integrate with the community, giving them an opportunity to “cover” the situation from the ground.
Baluyut said several art groups pitched in to raise funds.

Others who contributed their works for the auction were photographers Luis Liwanag and Veejay Villafranca and painter Elmer Borlongan.

In Baguio City, a group of poets organized a poetry reading and writing forum also to generate funds. So far, Baluyut said they have raised around P80,000 for the mission.

“I’m happy because these artists are rallying under the banner of ARMK,” Baluyut said. “They see this [effort] as their outlet in times like this.”

In a separate initiative, French philanthropist Hubert d’Aboville, through his foundation, Together-Ensemble Foundation, also headed to North Cotabato and donated 10 tons of rice to farmers, reeling from the impact of El Niño.

Two farmers died while several others, including policemen, were hurt in a bloody dispersal of a farmers’ rally that appealed for food aid on April 1.