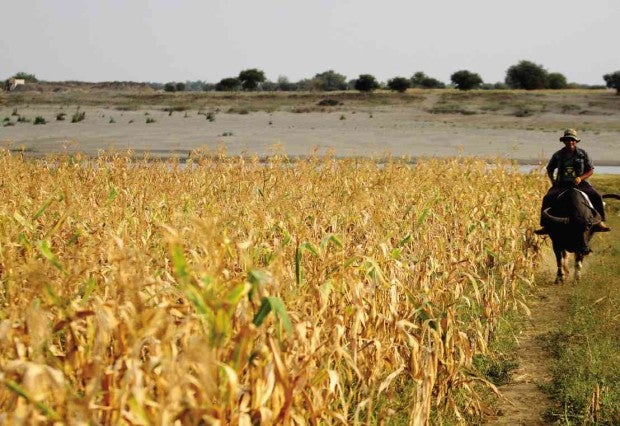 PARCHED LAND Corn stalks in Tuguegarao City have turned brown as temperatures rise, intensified by El Niño. Nearby, the Cagayan River water level has dropped to one of its lowest. RICHARD A. REYES

Temperatures around the Philippines soared close to “extremely dangerous” levels Wednesday as the International Rice Research Institute (Irri) warned that the world faced another food crisis similar to the 2007-2008 crunch caused by El Niño.

The heat index—the actual temperature felt by the body—reached 52.3 degrees Celsius Wednesday in Nueva Ecija, breaking the record 51 degrees reported by the weather station in the province on Monday.

This was the highest heat index recorded so far since the onset of the dry season in March.

It was also just 1.7 degrees lower than the “extreme danger” level of 54 degrees Celsius at which, according to the state weather bureau, heatstroke is “imminent” under continued exposure to the sun.

The heat was so intense that students at Wesleyan University-Philippines in Cabanatuan City were allowed to ditch their uniforms for more comfortable clothing, while other residents gulped down thousands of liters of iced water and made halo-halo vendors rich.

Other residents sought refuge in air-conditioned shopping malls or took a dip in the sea.

Herminio Ambrocio, a retired military officer, said he stayed in his air-conditioned room after his morning walk.

Hadji Santaygilio, a farmer from Cabu village, chose to stay at his nipa hut on his citrus farm, as using the air conditioner in his house was expensive.

Buddy Balajadia said men in his village, Caalibangbangan, went around half-naked, while his family tried to cope with the heat by eating halo-halo.

At 23 other weather stations, the highest heat index ranged from 35.3 degrees to 39.9 degrees.

In the three weather stations in Metro Manila, the maximum heat index on Tuesday was 39 degrees in Port Area, Manila; 41.1 degrees at Ninoy Aquino International Airport in Pasay City and 45.4 degrees at the Science Garden in Quezon City.

The heat index, Pagasa said, is the temperature actually felt by the body and measured based on air temperature and humidity.

The weather bureau has warned that the country will continue to have “generally warmer than average” temperatures this month as El Niño shows signs of ending by the middle of the year.

According to Pagasa, a heat index of at least 41 degrees to 53 degrees Celsius is considered the “danger” level due to probable heat cramps, heat exhaustion and heatstroke from continued activity under the sun.

When the heat index ranges from 32 degrees to 41 degrees Celsius, the weather bureau calls for “extreme caution.”

In 2007-2008, a strong El Niño ravaged farms around the world, drastically affecting harvests and pushing up prices of commodities, including rice.

The Laguna-based Irri sees another food crisis threatening the world and attributes it to El Niño and the overall trend of climate change.

The situation remains stable and the threat will advance or decline depending on whether rice importing countries panic as they did almost 10 years ago, Irri said in a statement Wednesday.

The Food and Agriculture Organization, in an update on the impact of the current El Niño on food security and the needed interventions, placed 25 countries, including the Philippines, on “high priority” for early action and response.

“Combined with lower stocks in a few key countries, emerging patterns in regional and global grain supply threaten the repeat of the painful rice price crisis in 2007-2008,” Irri said.

“To address such a crisis at a maximum impact, joint action is needed among countries, particularly the Asean+3 and India—recognizing shared responsibility as well as shared investment—and a regional trade outlook,” it said.

Irri said the 2007-2008 price spike prompted Asean to draw up a regional integrated food security framework along with a strategic plan of action.

This in turn led to the setting up of the Asean+3 Emergency Rice Reserve (Apterr) in 2012, aimed at ensuring the long-term food security and livelihood of the people in the East Asian region .

“[But Apterr’s] organization has been quite delayed and its feasibility yet to be tested by a major challenge,” Irri said.

The institute added that beyond the framework and the plan, “much more needs to be done, and regional cooperation will be essential to manage a food crisis.”

In September 2011, the Asean+3 nations signed the agreement to create Apterr, committing the 13 signatories to build up a reserve of 787,000 tons of rice in anticipation of instabilities in supply resulting from natural disasters.

The Apterr pact also commits the 13 countries, which together account for two-thirds of global rice production and more than half of global rice exports, to raise $4 million for an endowment fund.

Sam Mohanty, chief of Irri’s social sciences division, said in a blog post the risk of another global price spike largely depended on whether importing countries would panic as they did in 2007-2008.

“Despite the current stability in the rice market, there are reasons for concern about the direction of the market in the medium term,” Mohanty said, referring to mid-to-late 2016.

Citing data from the US Department of Agriculture, Mohanty noted that the world’s five major exporters—India, Thailand, Vietnam, Pakistan and the United States—continue to decrease every year since peaking at about 41 million tons in 2013.

Data from the USDA show that the Top 5’s combined inventory will shrink by the biggest amount this year, by 40 percent to 19 million tons from 32 million tons in 2015—the tightest supply situation since the price spikes of 2007-2008.

Still, prices are expected to remain “fairly stable” until early next year, especially if harvests in the major rice-growing countries in the coming wet season turn out to be normal.

But a less-than-usual crop due to some major weather event might push major exporting and importing countries like the Philippines to the limit.

“If they panic similar to what happened in 2007-2008 and resort to excessive buying and export restrictions, then another price spike is in the offing,” he said.

“However, if they keep their cool and remain rational regarding their needs, the market price may still go up, but only to a level that is consistent with market fundamentals,” he said. With a report from Armand Galang, Inquirer Central Luzon