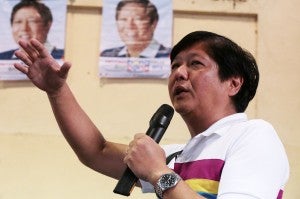 SAN PEDRO CITY, Laguna — Professors at the University of the Philippines Los Baños (UPLB) assailed the family of vice presidential candidate and Sen. Ferdinand “Bongbong” Marcos Jr. for what they called “an organized and wilful distortion” of history.

The UPLB professors’ statement, dated March 31, is being circulated in various departments, and has been signed by more than 100 people as of Wednesday, according to Prof. Dwight Diestro of the Department of Social Sciences.

In a telephone interview, Diestro said the statement was written by History professors and was in line with a similar initiative from the UP Diliman campus.

Professors from the Jesuit-run Ateneo de Manila University earlier came up with a statement that scored the Marcoses for refusing to acknowledge that human rights abuses were committed during martial law.

In the statement, the UPLB professors said “historical revisionism” was nothing new in the family of the late strongman Ferdinand Marcos.

They cited, in particular, the dictator’s biography, authored by Hartzell Spence, which “fabricated” stories about the elder Marcos’ heroism during World War II.

They said 48 major industries were cornered by Marcos’ cronies during martial law. Foreign debt ballooned to $28.3 billion but loan proceeds were spent on “non-priority” projects, for instance the mothballed Bataan Nuclear Power Plant.

The succeeding administrations should also be held accountable for failing to persecute the Marcoses for these atrocities, they said.