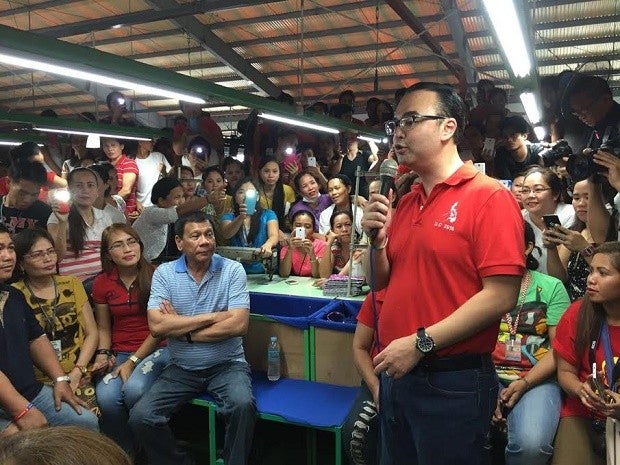 Political analyst Mon Casiple said in an interview with Radyo Inquirer it’s a big plus if a presidential candidate’s survey rating has risen on top because it pushes upward the popularity of his vice president.

Like in the case of Duterte, who has a strong following in the Visayas and Mindanao, he was able to push Cayetano up in the popularity ladder.

Based on a recent Pulse Asia survey commissioned by ABS-CBN, Cayetano is on the fourth place with 15 percent after Senator Francis Escudero, who got 21 percent at third place. Representative Leni Robredo got 22 percent while Senator Bongbong Marcos got the top spot with 28 percent.

But Cayetano showed strong support in Mindanao, which is Duterte’s bailiwick.

The poll said that even though Marcos was the leading vice presidential bet in the National Capital Region with 47 percent, while Robredo was the top choice in Visayas with 36 percent, Cayetano took the lead in Mindanao with 30 percent.

The survey was conducted from March 29 to April 3—around the time of the clash between police and the Kidapawan farmers, the power outage at the Ninoy Aquino International Airport and the hacking of the Comelec website.

Meanwhile, an independent survey affirmed Cayetano’s growing popularity, starting from Mindanao. In a survey conducted by Manila Broadcasting Corporation on April 2, which has 7,940 respondents, Cayetano got 30.2 percent in Mindanao while Marcos got 22.6 percent, Escudero 17.5 percent while last is Robredo with 16 percent.

Cayetano also took the lead in Region 7, which covers Cebu, Bohol and Siquijor. He got 36.1 percent, followed by Escudero with 22.4 percent, third is Robredo with 18.1 percent, and last, Marcos with 9.2 percent.

Lavina said Duterte has faith that simultaneously with his rise in the survey, he will carry Cayetano upward in the following surveys.