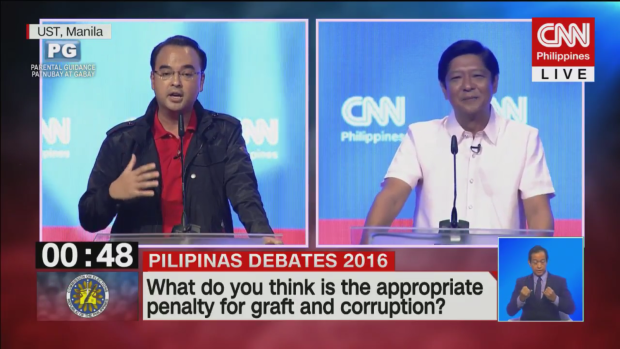 Netizens laud vice presidential candidate, Senator Alan Peter Cayetano, as the winner in all rounds during the “Pilipinas 2016 Vice Presidential Debate” held at the UST auditorium on Sunday.

They were amazed how the senator responded to the issues of the country and how he is going to the country’s problem in case he wins in the coming elections.

In an online poll, Cayetano gathered 125 votes from the total of 252 votes in the first round where the issue of corruption was tackled and when he attacked Senator Bongbong Marcos Jr.

On second place for the netizens is Representative Leni Robredo with 80 votes, third is Marcos with 53 votes, Sen. Chiz Escudero with five votes and Sen. Antonio Trillanes IV with two votes while Senator Gringo Honasan got zero.

In the succeeding rounds, Cayetano also topped them all and netizens consider him the overall winner in the debate.

“He was most consistent in talking about his and presidential candidate Rodrigo Duterte’s platforms, continually bringing up the tandem’s promise to eradicate crime in three to six months months. Their message of political will and leadership was clear,” said one online observer.

In the heated argument between Marcos and Cayetano, another blogger said Cayetano was able to give exact information to fight Marcos and disprove the late dictator’s son.

Cayetano was also able to stand up for being an anti-corruption advocate in the said debate.

The debate was organized by the Commission on Elections and media partners CNN Philippines and Business Mirror.