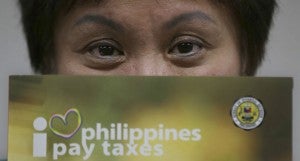 MANILA — Almost one in every 10 lawyers in four major cities paid zero tax for 2014 while over a tenth declared a monthly gross income similar to a low-ranked policeman, the Department of Finance (DOF) said Wednesday.

In its Tax Watch advertisement, the DOF said out of the 1,522 lawyers who filed their 2014 income taxes in the cities of Cebu, Davao, Makati and Quezon City, 141 or 9 percent had no tax due.

Twelve percent or 194 filers, meanwhile, declared a monthly gross income of less than P13,492, which the DOF noted was equivalent to the monthly gross salary of a Police Officer 1.

The DOF also cited “questionable declarations” of 2014 income tax due ranging between a low of P372 and P5,623 among eight lawyers in the four cities.

The Bureau of Internal Revenue (BIR) had also “named and shamed” doctors, among other self-employed professionals, who had not been paying correct taxes.

Earlier DOF estimates showed that only 400,000 of the 1.8 million self-employed in the country have been paying their correct taxes.

BIR Commissioner Kim S. Jacinto-Henares said in 2015 that the government would gain up to P300 billion a year if foregone revenues from upper-tier, non-fixed income earners who have been pervasively evading tax payments could be collected.

In the advertisement, the DOF noted that “when you don’t pay your taxes, you’re a burden to those who do.”

It also reminded taxpayers of the April 15 deadline for 2015 income tax-filing.

This year, the BIR was tasked to collect P2.026 trillion in taxes, which would be the first time that the take of the country’s largest tax-collection agency could breach the P2-trillion mark.  SFM