Aquino apologized to families of soldiers killed in Basilan – witness 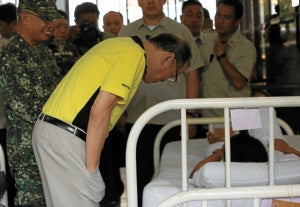 President Aquino visits the soldiers who were wounded in the 10-hour battle with the Abu Sayyaf bandits in Tipo-Tipo, Basilan on Saturday.  INQUIRER PHOTO/JOAN BONDOC

ZAMBOANGA CITY — President Aquino apologized to the families of the 18 soldiers who were killed in an encounter with Abu Sayyaf bandits in Tipo-Tipo Basilan on Saturday.

“He said sorry. He said he was here to say sorry and to give assistance,” Rosalinda Dominguez, the aunt of Private First Class Doreen Aspurias, said after meeting with the President inside the Edwin Andrews Air Base here Wednesday afternoon.

Dominguez said most of the families who met with Mr. Aquino asked why it took so long to rescue the members of the 44th Infantry Battalion.

She said the President told them that rescue troops could not immediately enter the battle site because of the intense fighting at that time.

“Kasi may bakbakan. Hanggang ngayon may bakbakan pa (Because there was fighting.  Until now, fighting goes on),” Dominguez quoted the President as saying.

Maj. Gen. Gerardo Barrientos, commander of the 1st Infantry Division, said the President came to this city to “personally sympathize” with the families of those who died.

“A team from the Presidential Management staff is talking to the families, writing down their other concerns and needs,” Barrientos said.