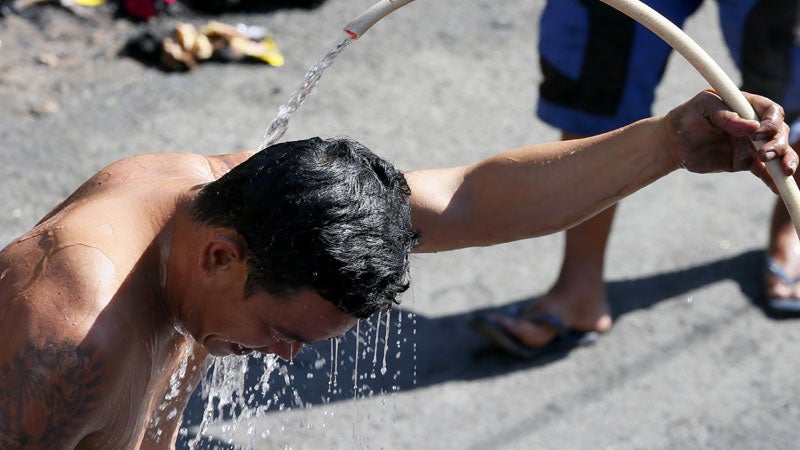 A HEAT index record was set for the second time in less than two weeks as summer temperatures soared amid the lingering El Niño.

The heat index—the actual temperature felt by the body based on air temperature and humidity—touched a dangerous 51 degrees Celsius in Nueva Ecija on Monday.

This was the highest heat index so far since the onset of the dry season in March, surpassing the previous record of 49.4 degrees Celsius set in Occidental Mindoro on April 2.

The heat index of 51 degrees Celsius is just three degrees below what the weather bureau considers the “extreme danger” level when heatstroke is imminent.

The Philippine Atmospheric, Geophysical and Astronomical Services Administration (Pagasa) warned the country would continue to experience “generally warmer than average” temperatures in April.

On Monday, 14 of Pagasa’s 53 weather stations around the country recorded a maximum heat index of at least 41 degrees Celsius, considered the “danger” level when heat cramps, heat exhaustion and heatstroke are possible with continued activity under the sun.

In 36 other weather stations, including in Metro Manila, the maximum heat index ranged from 32 to 41 degrees, which Pagasa said called for “extreme caution” against heat-related illnesses.

Pagasa’s five-day forecast for select cities showed the highest heat index would be felt at nearly 38 degrees Celsius in Tuguegarao City this week.

In Metro Manila, the heat index is forecast to range from 37.9 to 38.6 degrees Celsius.

The heat index is also called the human discomfort index.

Read Next
DOJ gives Deguito till May 3 to file answer
EDITORS' PICK
Café-quality coffee at home with NESCAFÉ GOLD
Drug rings ‘toyed’ with PNP, PDEA? Too early to say but possible, says Villanueva
Bello denies nurses-for-vaccine offer to UK, Germany
On 35th Edsa anniversary, Duterte tells Filipinos to protect rights, democratic institutions
JC Cares Foundation extends support to bloodletting program
3 things you need to know about your laundry detergent
MOST READ
EXPLAINER: Legitimate children can use their mom’s surname — SC
Biden revokes Trump ban on many green card applicants
Algieri warns Garcia: If Pacquiao puts you down, you’re not getting up
Persida’s folly
Don't miss out on the latest news and information.