Now it’s UP Law for ‘whiz kid’ after Ph.D. in Physics 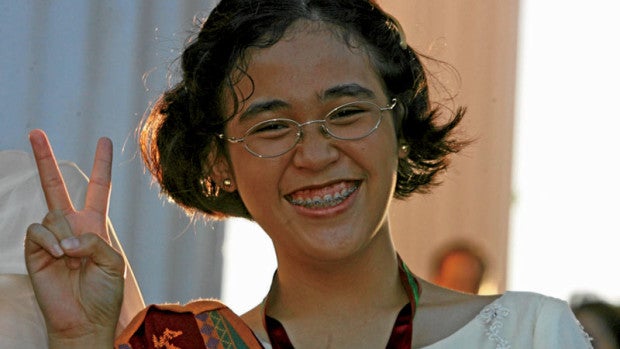 NOWHERE to go but further.

The 25-year-old, who started college at 11 under an experimental program for gifted children, was among the 218 who passed the 2016 UP Law Aptitude Exam.

“It was a great thing that I was able to show people that it can be done,” she said of the Early College Placement Program (ECPP) in an Inquirer interview in 2007. Many gifted children end up discouraged or unproductive because of a dearth of programs to guide them and maximize their abilities, Fudolig said.

These whiz kids sometimes refuse to take required courses, claiming early mastery in these areas, or are simply interested in other things, she added.

“Many people think that a child, even if equipped with the mental abilities, is not emotionally prepared to enter college. I am glad to have proven them wrong,” Fudolig said.

Tony Fudolig and Lyn Dimaano apparently took pains to have their eldest child grow up a balanced individual.

“Mikaela could read and write in English and Filipino at 3 years old,” Fudolig’s mother recalled. But she made sure that the child still had her share of playmates and nursery games, she added.

Recalling her first day at Math 11 class when she was 11, Fudolig laughingly said she was intimidated. “It was one thing to have your classmates stare at you because you are three years younger, and another for them to strangely appraise you because of the way you dress.”

She recalled in particular how her Math 11 classmates stared at her baby-doll shoes, which she wore in high school: “They were all so quiet, choosing to remain silent in their seats, wearing their college getup. And there I was, wearing a skirt and a blouse, squirming uncomfortably in my seat.”

Then on the verge of adolescence, Fudolig was shocked at the fast pace of the summer lessons. She got a grade of 72 on the first exam, and felt disheartened.  After days of intensive study, she took the second exam—and aced it, getting the highest score in class.

“I felt very happy that I could fit in,” she said.

At the age of 12, Fudolig was formally enrolled as a BS Physics student at the UP National Institute of Physics. She also took two consecutive music courses “because I just love studying different kinds of music in the world,” she said.

The ECPP’s careful steps in keeping her out of the public eye helped a lot, according to Fudolig, who recalled a similar case of another student who was accepted to the university at a young age.

The 13-year-old Philippine Science High School student was allowed to enroll at the UP College of Science, but “cameras would sometimes follow her when she came out of the classroom. The other students, perhaps resentful of her achievements, would also bully and make fun of her in the corridors,” Fudolig’s mother recounted.

“It was a good thing there was an agreement that Mikaela be shielded from the media so she could live her life as a normal university student,”  the mother added.

The thought of teaching older students did not faze Fudolig. “I’m used to it. Last night, I tutored a high school classmate three years older than me, and I had no problem doing it,” she said in an earlier Inquirer interview.

In her graduation speech after college, Fudolig focused on opening new opportunities for others, including gifted students like herself.

“Instead of taking the road less traveled, the new graduates should make new roads,” she said in 2007.

For the next nine years, the trailblazer did just that, and is set to prove herself anew as a future lawyer.