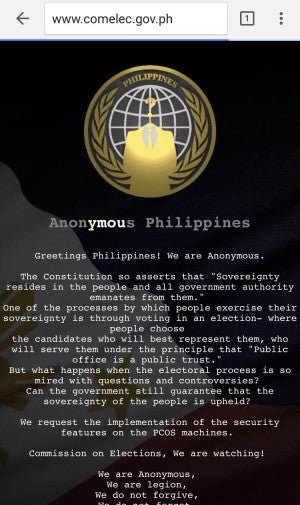 MANILA — The National Bureau of Investigation has now a lead on those behind the hacking of the Commission on Elections (Comelec) website a few weeks ago.

“I would say we have a very good lead,” said Roland Aguto, NBI Cybercrime Division chief. “We’re hoping that in the next few days, we will be able to identify, arrest and charge the person responsible.”

He, however, refused to elaborate, saying it might jeopardize the ongoing investigation.

He only said that the hackers were in the Philippines, based on an IP address check and intelligence report.

Once identified, they would face charges for violating the Cybercrime Prevention Act, Aguto added.

Comelec spokesperson James Jimenez, meanwhile, assured the public that sensitive biometrics data were not included in the database leak by a hacker group.

“We know the data they (hacker group) claimed to have and we know that data do not include biometrics,” Jimenez  said in a media briefing on Tuesday.

Jimenez said the hacking would not compromise the elections results and that data inside the Comelec could not be manipulated.