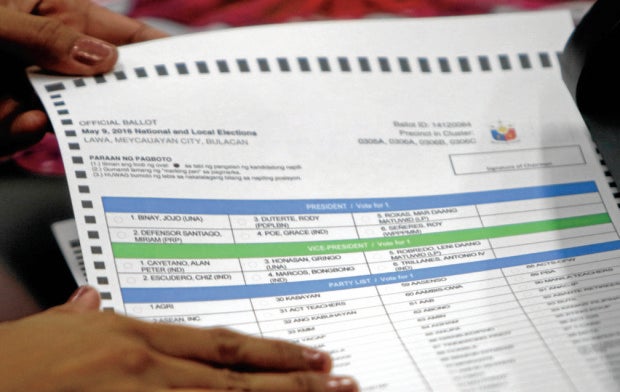 Sample of ballot from the Comelec. INQUIRER PHOTO

The camp of Mar Roxas reiterated that the Commission on Elections ballot showing the names of the administration bets highlighted in yellow spread around by the “rabid supporters” of Davao City Mayor Rodrigo Duterte on social media is not the official ballot to be used on election day.

It also hit “rumormongers” from the Duterte camp who criticized “Daang Matuwid” as nicknames of Roxas and running mate Leni Robredo in the ballots. Overseas absentee voters supporting Duterte are claiming that due to the inclusion of the nicknames, the vote-counting machines are only reading votes in their name.

Comelec spokesperson James Jimenez, in an earlier interview, said that these were merely sample ballots used as campaign materials.

“These are sample ballots, mock up, fake, just to educate the voters, and they are not from the Comelec,” he said.

He added: “Comelec does not come out with sample ballots like that. Comelec comes out with official ballots and you can get this only from the BEI (Board of Election Inspector).”

Jimenez said sample ballots with the names of certain candidates highlights have been used many times in the past elections.