Marcos should be banned from public office, Robredo says 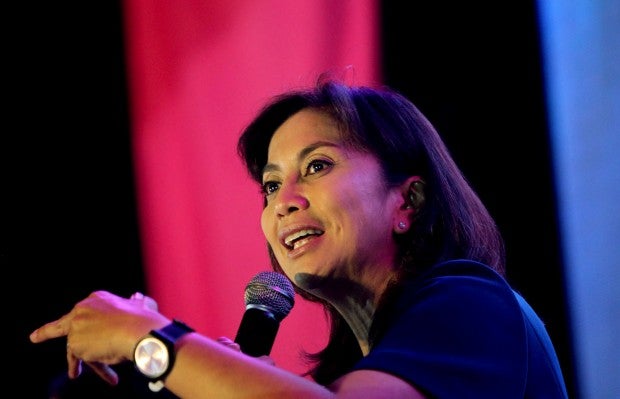 Liberal Party vice presidential bet Leni Robredo believes that Senator Ferdinand “Bongbong” Marcos Jr. should have been given a lifetime ban from working in a public office, given the magnitude of wealth the Marcos family allegedly stole and the human rights abuses committed during martial law.

Asked if she thinks the Marcoses should have been perpetually disqualified to run for public office, Robredo said: “With the magnitude of wealth that was robbed from us, dapat sana oo.

“Talagang naniniwala ako na if he (Bongbong) would be elected to office, lalo na for something as high as the vice presidency, parang laughing stock of the world tayo,” Robredo said in an interview with Karen Davila at ANC’s Headstart.

The Camarines Sur representative explained that the government might have failed in instilling into the people the “real clues about martial law and the real clues why EDSA (People Power revolution) happened.”

Robredo did not mince words as she criticized the Marcoses for “brainwashing” the Filipinos even before the start of the campaign period.

Marcos is now leading the latest Pulse Asia vice presidential survey commissioned by ABSCBN with 28 percent. Next to the senator is Robredo, who got 22 percent but is statistically tied with Senator Francis Escudero with 21 percent.

Senator Alan Peter Cayetano is still trailing behind with 15 percent, while Senators Gringo Honasan and Antonio Trillanes IV remained at the bottom with five percent and four percent, respectively. JE