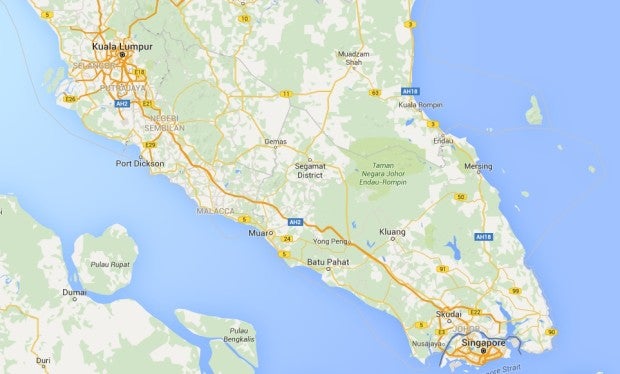 Linking Kuala Lumpur to the island-state of Singapore. Photo screengrab from Google maps.

Malaysia and Singapore have yet to iron out major elements that will shape the multibillion-dollar high- speed rail project that will link the island state with Kuala Lumpur.

But that has not deterred the governments of China and Japan from pressing their influence on the two South-east Asian neighbors to position their home-grown engineering concerns advantageously, ahead of an international tender to be called in the first quarter of next year.

In recent weeks, Japanese and Chinese government officials, together with their private-sector executives from the rail industry, have been lobbying the Malaysian government and key agencies overseeing the transport sector to push their respective agendas for the construction of the 350-km link.

Executives from the East Japan Railway Company, better known as JR East, and officials from the Japanese Embassy in Kuala Lumpur met Malaysian Transport Ministry officials last month to press their case for a lead role in the rail project.

“The project is a game-changer and the visits and engagements (by the Chinese and the Japanese) have become very frequent and all discussions inevitably centre on the HSR (high-speed rail),” said a transport industry executive involved in the planning of the project that will cut travel time to 90 minutes between the two cities from more than six hours by ordinary train.

The high-speed rail link proposal, which was shelved temporarily last year due to budgetary concerns on the Malaysian side, is back on track with the recent appointment of a team of consultants to establish broad parameters on the project for the consideration of the Malaysian and Singapore governments.

The consultants, comprising McKinsey & Co, Systra of France, and Malaysia’s Minco Consulting, have been assigned by the Malaysian government with the complex task of proposing possible alignments of the routes between the two cities, the multitude of contract packages under the project and the funding structures for the massive undertaking that is estimated to cost between US$10 billion (S$13.4 billion) and US$15 billion.

The rail project–that will largely be constructed on land on the Malaysian side and run through underground tunnels in Singapore–will test bilateral ties. For starters, both parties must agree on how the rail link will be financed and how the tender process will be carried out. Other formalities on the operation of a direct express service between the two cities and commuter operations also need to be resolved.

The many hurdles are not dampening interest from a growing cast of global players vying for what is becoming the most-prized infrastructure undertaking in South-east Asia.

Germany’s Siemens and Spain’s Talgo are among the European companies that have signaled their interest in the project. But transport industry consultants say the real big fight will be between the railway firms from China and Japan.

Japan has long played a major role in the economic development of many Southeast Asian nations, particularly in Malaysia during the 22-year premiership of Mahathir Mohamad, whose “Look East” policy favored Japanese investments and technology to push many state-led industrialization initiatives, such as in car-making.

But under Datuk Seri Najib, Tokyo’s role has been usurped by Chinese firms that have successfully participated in several large infrastructure projects, such as the US$1.1-billion second Penang bridge.

Now, the rail sector is emerging as a crucial element in China’s push to become a major economic player in the country.

China has already begun laying down the building block for a pan-Asian rail network that will stretch from Kunming in southern China to Singapore.

The Singapore-Kuala Lumpur high-speed rail will bring China’s plans for a pan-Asian network closer to reality because it will push for Thailand to consider a separate line that will connect Bangkok with Kuala Lumpur. More crucially, it will showcase China’s home-grown engineering and rail technology, which it hopes to export globally.

With so much at stake, the lobbying has grown intense. While the tenders for the numerous packages under the high-speed rail plan are expected to be called only some time in the next 12 months, consultants say the project now stands at a crucial juncture for international companies hoping to snare the lead role in the building of the line.

That is because the key specifications, such as the alignment of the railway line and the speed at which the trains will travel, will determine which international player will have the edge in the tender process.

For now, the big face-off is between units of China’s state-owned rail firms led by China Railway Engineering Corp. (CREC) and JR East.

Malaysian government officials believe that Singapore is partial to the Japanese providing the rolling stock and signalling systems because of its tested technology.

Malaysia, which will have to bear the lion’s share of the building costs, is in favour of the Chinese because of the promise of easy funding for its trains and technology that are less expensive than Japan’s. More than 80 per cent of the rolling stock used in Malaysia is Chinese made.

Beijing has also tied its railway bid to a clutch of key investments in recent months that have helped bail out several of Mr Najib’s controversial economic ventures linked to the financial debacle at state- owned fund 1Malaysia Development Berhad (1MDB).

The first came last November when state-owned China General Nuclear Corp paid more than US$2.3 billion for the power assets owned by 1MDB, which helped the fund stave off a default on one of its loans. In February, CREC took a lead role to develop a 1MDB property project in the outskirts of Kuala Lumpur, which will house the terminus for the high-speed rail project.

Several Japanese businessmen with long-established operations in Malaysia acknowledge that they are underdogs to China in the contest for the project.

“We are entering the fight with both hands tied,” said a chief executive of a Japanese engineering consultancy based in Kuala Lumpur. “But we are hoping that Singapore will push for the best competent technology, and that will give us a fair chance in the tender.” TVJ