AFTER the results of a new Social Weather Stations (SWS) survey showed that he was the new front-runner in the presidential race, Davao City Mayor Rodrigo Duterte became the target of vitriol from rivals Mar Roxas and Jejomar Binay.

Liberal Party (LP) standard-bearer Roxas described Duterte as a modern-day Ferdinand Marcos, the late dictator who had placed the country under martial law.

“Duterte is the most dangerous thing to happen to our country since Ferdinand Marcos,” Roxas said in an interview before flying to Tarlac City to reach out to voters along with his running mate, Camarines Sur Rep. Leni Robredo.

“He’s a threat to democracy because it’s his way or no way,” Roxas said. “He is a threat to our way of life because if you will confront him with the truth, he will answer you with invectives, insults or bullets.”

Vice President Binay said the people had the “moral responsibility” not to vote for Duterte whom he called a “butcher” and a “killer.”

Interviewed on Radyo Inquirer, Binay said every Filipino also had the moral responsibility to dissuade people from voting for Duterte.

“Why? This man is an executioner,” he said.

The mayor, who has boasted killing kidnappers and rapists in Davao City, leaped ahead of perennial survey front-runner Sen. Grace Poe in the nationwide survey the SWS conducted from March 30 to 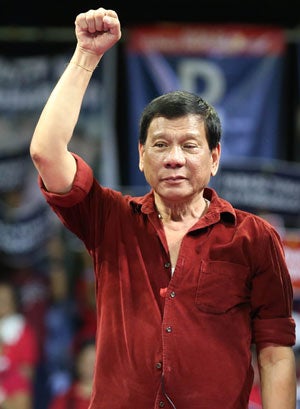 Results of the survey showed 27 percent preferred Duterte while 23 percent said they would most probably vote for Poe.

In third place was Binay with 20 percent followed by Roxas with 18 percent and Sen. Miriam Defensor-Santiago with 3 percent.

It was the first time Duterte has taken the lead in all three major SWS surveys since the election campaign started on Feb. 9 as his tough stance on crime has begun to resonate with many Filipinos.

In the race for the second-highest elective post, the survey also showed Sen. Ferdinand “Bongbong” Marcos Jr. having a 5-percentage point lead over Sen. Francis “Chiz” Escudero, who was neck-and-neck with Robredo.

SWS interviewed face-to-face 1,500 adults nationwide—300 each from Metro Manila, North Luzon, South Luzon, the Visayas and Mindanao. Of the respondents, 92 percent or 1,377 adults were validated voters. SWS said vote percentages excluded those who were not validated voters.

Results of the survey, first published in BusinessWorld, had a margin of error of plus or minus 3 percentage points.

Duterte’s camp said there was no truth to the claim of Roxas that the Davao mayor was a threat to democracy.

“It is not democracy that is being threatened by Duterte. It is Mar Roxas and his ambition to become President and the ruling class, the same ruling class represented by Poe and Binay,” Peter Laviña, spokesperson for Duterte, said in a statement.

“Like the rest of the presidential candidates who are threatened by a Duterte presidency, Roxas and his minions fear they will lose the trappings of that political power they have been holding on and clinging to for so long,” he said.

After the news broke that Duterte topped the latest SWS survey, Akbayan party-list Rep. and LP spokesperson Barry Gutierrez attacked the mayor and described his politics as “politics of fear.”

Roxas said the Davao mayor was a stubborn leader who ignored the views of others and refused to change his opinion on certain matters.

“What does that mean? [His presidency will be] a one-man rule,” he warned. “He’s the judge, jury and executioner. His word is the law even if we’re in a democracy.”

First, Roxas said, Duterte was a liar for promising to stamp out crimes nationwide within the first six months of his presidency.

He noted that the latest statistics released by the Philippine National Police showed that Davao had the biggest number of recorded murders in the country since 2008.

The city, where Duterte served as mayor for 20 years, also ranked second in homicide incidents and third in rape cases among 15 chartered cities.

“If he couldn’t do it in Davao, how could he do it all over the country?” he said.

He then criticized Duterte for publicly declaring his support for the New People’s Army (NPA), the armed wing of the Communist Party of the Philippines (CPP), which has been waging one of the world’s longest Maoist rebellion.

Even self-exiled CPP founder Jose Ma. Sison, Roxas added, had recently disclosed his intention to return to the country if Duterte wins the race to Malacañang.

“What will he do if the NPAs and soldiers engage in a gunfight? Which side will he take? Right now, he says he’s a supporter of the NPA,” Roxas said.

“[The NPA] collects revolutionary tax and takes advantage of small farmers and small businessmen. What kind of Commander in Chief will he be when he supports those who kill our policemen and soldiers?”

Lastly, Roxas said, Duterte was a flippant candidate who had disrespected “life, the women, the Church and our society.”

Roxas vowed: “I will fight [Duterte] because Filipinos are decent. The Filipinos work, make the sacrifice and do everything to live with honor.”

“It’s not right that [Duterte’s] brand of leadership will be kind of governance that we will have. For me, the decent should be the leaders of our country,” he said.

Joining Roxas in attacking Duterte, Binay said the mayor had struck the hand of a boy with a stick and that he later regretted  what he did because the boy was found innocent of the crime he was being accused of.

The Vice President added that Duterte made statements that were “un-Christian, unlawful” and violated human rights.

Binay asked whether those wanting to vote for Duterte admired him for doing things that were unlawful. He reminded the public that the country had already repealed the death penalty.

Binay asked whether the Duterte voters would regret their decision should the mayor win the presidency and their relatives ended up killed under his administration for violating the law.

“Vote for someone you can brag about and that you voted for the right person,” the Vice President said.

Results of the recent SWS survey elated the Duterte camp.

“We are grateful that the surveys are now reflecting what we have been witnessing and experiencing on the ground. The new SWS survey affirms the other surveys that [showed] Duterte on the clear lead in the presidential race,” Laviña said in a text message.

“While we are elated with the results of the recent surveys of SWS, Pulse Asia and Manila Standard, we still believe the final arbiter of who will be rightfully elected President is the people,” said Evasco, outgoing mayor of Maribojoc town in Bohol province.

The former rebel priest said the lead was still very tenuous and there was much work to do. “It is not over until it is over.”

Duterte has been attracting huge crowds during his campaign sorties across the country.

He was in the provinces of Maguindanao and South Cotabato over the weekend when news of his survey lead came out.

A day earlier, he had to snake his way into a six-hour traffic jam as people lined up along the route of his motorcade to Alabang in Muntinlupa City where he spoke before a largely upper- and middle-class crowd.

Duterte will be back in Metro Manila today to resume his campaign in Luzon where he hopes to build on his momentum.