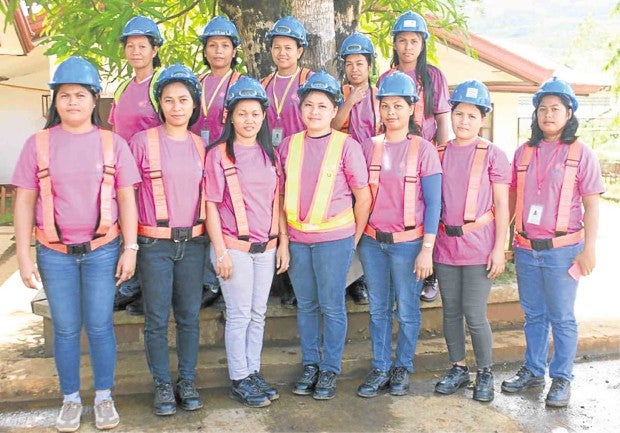 SURIGAO CITY—In a remote coastal village in Dinagat province, a group of mothers is breaking out of the mold. Determined to improve their lives, the women are taking the driver’s seat, literally.

“I never imagined myself driving cars to make a living. Seeing vehicles climbing steep hills and navigating narrow roads alongside deep ravines used to give me goose bumps,” says Mylen Centino, a young widow who lost her husband to cancer a year ago.

Centino, 31, is one of 12 women undergoing a six-month driving course at Cagdianao Mining Corp. (CMC) mine site in Barangay Valencia in the nickel-rich town of Cagdianao.

The women come from different backgrounds. Aside from Centino, they also include a former overseas worker, a labandera (laundry woman) and young mothers whose husbands do not have stable jobs.

Before they joined the training program, the women were stay-at-home housewives and have never driven an automobile.

The trainees are taught the skills expected of every good driver, such as how to negotiate the treacherous mine site terrain.

The driving simulations they go through are not easy nor simple. For instance, they have to stop and restart the car engine on a slippery slope, with dozens of giant haulers and heavy equipment coming from opposite directions during normal mining operations.

But the women are undaunted, especially Centino, who has an 8-year-old child to raise.

“When my husband was bedridden, I had to think hard about [what was going to happen to] my child. He was the breadwinner, I was a simple housewife who knew nothing but attend to household chores,” Centino recalls, tears welling in her eyes.

Overcoming her fears, Centino joined the driving program. She is now being considered for a driving job at CMC, a subsidiary of Nickel Asia Corp. (NAC), one of the country’s biggest mining conglomerates.

Darlito Boraquit, human resource supervisor at CMC, says NAC wants to expand the role of women in the mining sector by empowering them with new skills.

Under NAC’s Women In Mining (WIM) initiative, Boraquit says high school graduates like Centino, who have limited opportunities, are given a new lease on life.

The women trainees consider the driving course a good “fallback” considering the “unreliable” income of their husbands, who are mainly fishermen.

They point out that that their town, which faces the Pacific Ocean, has a short fishing season and is battered by northeast moonsoon winds (amihan) most of the year.

Margie Bucio, a 33-year-old mother of three, whose husband has no stable job, says the CMC program has given her a new outlook on life.

“I was a labandera, one of the jobs in this village that women can do to earn a living,” Bucio says. “I want to change that. I don’t want to wash other people’s clothes for the rest of my life.”

Jerlyne Gooc, a 35-year-old mother of two and a domestic helper in Kuwait for two years, says she plans to gain as much experience as a driver to seek a different kind of job overseas.

“I won’t be cleaning houses when I go back. I will be driving vehicles to earn a much higher salary,” she says.

As the women complete the final phase of their training, which they hope will mean stable income, they are aware it will not be easy to go into an occupation dominated by men.

“Driving is a man’s job, that’s how our society sees it. But we’ve proven that we can do it,” says Florie Ensalada, the oldest in the group at 37.

Ensalada says she and her colleagues initially found the mining terrain difficult and challenging.

“Most of us found it hard at first to climb and drive down hills, as well as negotiate smaller, tighter curves. Add to that slippery roads common in mineralized soil,” she says.

Two of the trainees backed out, though many of the women say this is because of the stereotypes they know they have to face after the program.

Lorina Bactasa, a 35-year-old mother of six, says it took great effort to ignore skeptics who openly doubted their ability to complete the course.

“Some male drivers in the site would tease us that we wouldn’t last a week. Even neighbors and some family members expressed doubts that we can do it,” Bactasa says.

But the women bonded and swore to look out for each other.

When an engine conks out, the women help their colleague in distress by pushing the vehicle to safe ground.

The women drivers proved to be mentally alert and adept at responding to challenging situations on the road, says instructor Rogelio Aspacio.

“I have taught hundreds of drivers for years and, based on my experience with the women, their performance is at par with the men’s,” Aspacio says.

But what sets the women apart, he says, “is that they are easier to train because they have a larger capacity for learning, because they listen and process instructions carefully.”

“Men have the tendency to disobey instructions, perhaps out of sheer confidence that they can do it even on the first try,” Aspacio says.

He has also observed that the women use fuel more efficiently than men because they “tend to drive calmly, their grip is easy and precise. They don’t make rash moves.”

It is no surprise, he says, that the trainees not only earned his respect but also the respect of others.

Aiza Mindavia, a 27-year-old mother of two, says the growing respect she gets both at home and the workplace has boosted her self-esteem. “I no longer get judgmental looks from some of the male drivers who used to look down on us,” she proudly says.

“Even my husband now calls me ‘ma’am’ at home,” she adds, eliciting laughter from her colleagues.

Disa Dilinggan, 33, agrees. She says her new skill has put her on equal footing with her husband, who is a dump truck driver.

“I think it’s not about wanting to be equal to our husbands, or other men. I believe that the most important thing we gained from this training is respect—respect for ourselves and respect from others,” says Dilinggan, a mother of three.