P500K reward up for arrest of gunman in Calauan ambush; suspect’s sketch out 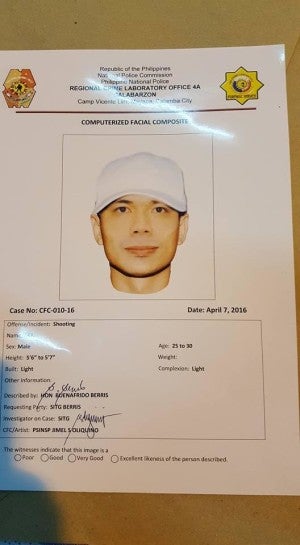 This is the computerized facial composite of the suspected gunman in  a recent attempt to kill  Calauan, Laguna Mayor Buenfrido Berris. (Photo courtesy of the Philippine National Police Calabarzon)

SAN PEDRO CITY, Laguna — A group of friends of Mayor Buenafrido Berris of Calauan town in Laguna province has put up a P500,000-reward for the arrest of the gunman in an attack on the mayor last month that left two persons, including a candidate for town councilor, dead.

Berris, an independent candidate seeking reelection, survived the ambush and had returned to the campaign trail two weeks after the attack that happened as the local campaign started.

Berris’ companions, driver Leonardo Taningco, and Emmanuel Peña, a candidate for Calauan councilor, died. The mayor’s group had just attended a meeting at the barangay hall in Barangay Imok in Calauan when a lone gunman approached their vehicle and shot them several times on March 27.

Senior Insp. Luis Perez, Calauan police chief, said the police on Monday released a copy of an artist’s sketch of the suspected gunman, drawing from Berris’ description of the attacker.

The male suspect, police said, was between 25 and 30 years old and of medium build.

Perez, in a text message to the Philippine Daily Inquirer, said police have been checking leads that the attack was related to politics or political rivalry.

The car used by the suspect was recovered earlier in San Pablo City. The vehicle was registered to an owner from Batangas province.

In a separate telephone interview on Monday, Peña’s younger brother, Philip, said the family had decided not to field anyone to replace Emmanuel.

Emmanuel’s supporters earlier urged his mother, Faustina, 60, to take the place of her son.

“But we decided not to let her [enter the race]. We are worried that at her age, she could not handle the stress of the campaign and of the job itself, should she be elected,” Philip said.

He said the family was still in shock, noting that Emmanuel never had any enemy.  SFM