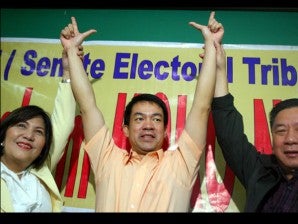 Pimentel filed his complaint before the joint DOJ-Commission on Elections committee investigating allegations of electoral fraud in the 2007 senatorial elections.

“Today I am filing a complaint for electoral sabotage—a nonbailable offense—before this joint DOJ-Comelec panel in connection with the fraud perpetrated in the 2007 elections where I was the victim because the fraud led to the proclamation of a non-winner as the winner,” Pimentel said after submitting his complaint.

Pimentel said he was pursuing charges even after he won his election protest in the Senate Electoral Tribunal because he wanted the “brains” behind the cheating in the 2007 elections to be held to account.

“When I filed my protest, one of the purposes was, when I’d proven election fraud, I would file cases of election offenses against those responsible for the fraud. I’m just doing what I had committed to do from the very start,” the senator said.

“(Ferrer) was the one who silenced my lawyer during the proceedings, threatening her with bodily eviction from the premises,” Pimentel said. “So obviously, he was the enforcer for the group during the Comelec proceedings.”

Pimentel said he would present former Autonomous Region in Muslim Mindanao Governor Zaldy Ampatuan, former Maguindanao provincial administrator Norie Unas, and former provincial election supervisor Lintang Bedol as his witnesses and use the affidavits that they had submitted.