Plane forced to land in Subic due to mechanical problem 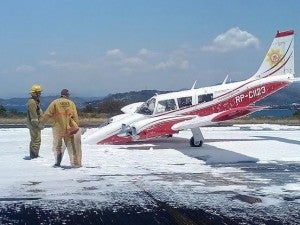 SUBIC BAY FREEPORT — A twin-engine aircraft carrying two pilots made an emergency landing at a section of the Subic Bay International Airport (SBIA) here after its nose wheel malfunctioned on Sunday morning.

According to SBIA officials, the front landing gear of aircraft RP-C1123 (Piper Seneca 23) failed to retract, prompting its occupants to seek help from the airport’s operation center at about 10 a.m.

Legaspi said he tried to manually loosen and open the landing gear, but had failed, prompting him to alert the SBIA Control Tower, according to a report from the Subic Bay Metropolitan Authority (SBMA) Law Enforcement Department.

The SBMA crash team sprayed the aircraft with fire retardant chemicals as a precautionary measure, while an emergency medical trauma team tended to the passengers.

The aircraft, SBIA officials have said, is owned by the APG International Aviation Academy, a flight school operating inside the free port.

The six-seater plane was towed away from the runaway, to allow the Civil Aviation Authority of the Philippines to investigate the accident.  SFM