Five hecklers unfurled a banner and chanted “Never again, never again!” as the namesake son of the late dictator began to deliver his opening remarks during the vice presidential debate sponsored by the Commission on Elections and CNN Philippines Sunday.

Marcos supporters in the audience countered by chanting “BBM, BBM!”

The hecklers were immediately hustled out of the University of Santo Tomas (UST) pavilion while chants of “Magnanakaw (Thief), magnanakaw!” erupted.

Outside the UST gate, placard-carrying anti-Marcos protesters had also converged before the debate.

At the bleachers of the UST pavilion were supporters of the candidates, clapping and stomping.

It was an “oops moment” for Marcos when he initially said “yes” to the question whether the candidates had been engaged in any corruption activities in the past.

Marcos raised the  thumbs-up sign to the question but changed it to the thumbs-down sign  after realizing his mistake. He was caught in the photos circulating online smiling after his mistake. The blunder drew laughter and boos from the audience.

For a brief moment, the camera focused on Vice President Jejomar Binay, who was in the audience to support his vice presidential candidate, Sen. Gregorio Honasan. This was after Honasan said he objected to trial by publicity, echoing the usual line of Binay, the standard-bearer in the United Nationalist Alliance. 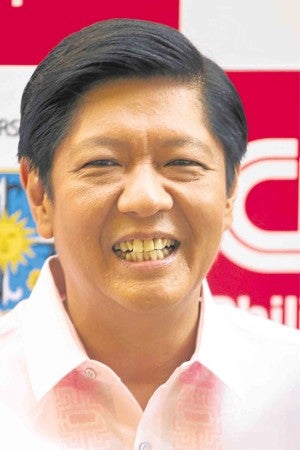 Binay is facing several allegations of corruption for allegedly taking kickbacks and rigging contracts during his time as Makati City mayor. He has denied the claims, saying they were meant to undermine his presidential bid.

“This is a serious issue. This should be decided by the courts at the right time,” said Honasan.

This then prompted Sen. Antonio Trillanes IV, Binay’s lead inquisitor in the Senate, to chime in.

Binay could be seen booing Trillanes.

In response to a question by a UST medical student as to the appropriate penalty for plunder, Cayetano said that corruption was so ingrained in Philippine society that the capacity to plunder had become the basis of occupying electoral posts.

“If you steal big, you become a congressman. You steal bigger, a senator. If you are friends with [Janet Lim-] Napoles, you are cleared and you become VP (Vice President),” Cayetano said in Filipino, adding, “Our lives are pervaded by corruption, unless we change the system.”

A miffed Cayetano retorted with a dig at Marcos’ allegedly fake diplomas while claiming that he would not have gone to the  People Power Revolution if he had been corrupt. “Where were you whenever we talked about corruption? You’re never there.  During the Napoles hearing, he was angry at me for summoning Maya Santos who turned out to be his and Napoles’ in-between,” he said.

Marcos replied the Senate hearings were purely political exercises. “I will not take part in that kind of politicking. They claim it is anticorruption but they are only glorifying themselves,” he pointed out.

The “love triangle” among Rodrigo “Digong” Duterte,    Marcos and Cayetano was raised in the course of the altercation.  “Mayor Digong had said it, if the problem of criminality is not solved in three to six months, he will hand over the presidency to Bongbong,” Marcos said.

Before Duterte announced his presidential run, the two had both courted him serve as his running mate.

Cayetano, in his response, said Duterte was being “playful” when he endorsed Marcos before Ilocano voters. “But he said in his sorties all over the country, ‘If you won’t vote for Alan, don’t vote for me,’” Cayetano said.

Trillanes asked Cayetano: “How could you say you can fix criminality in three to six months when Davao is the fourth city in the country with the highest number of crime cases?”

Cayetano told Trillanes to ask the most beautiful woman from UST to walk around Davao City. “If she is harassed or raped, Mayor Duterte and I would no longer run,” Cayetano said.