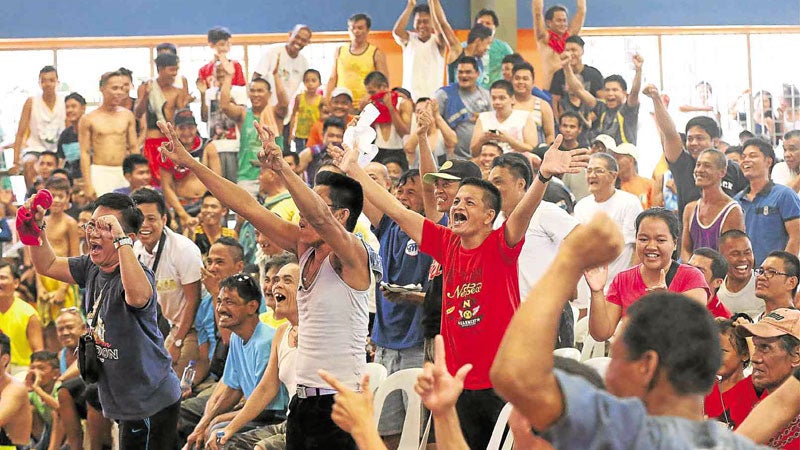 THE CROWD goes wild at the Delpan Sports Complex in Manila as Manny Pacquiao scores over Timothy Bradley, although the venue was less packed this time compared (bottom) to his match-up last year with Floyd Mayweather Jr. MARIANNE BERMUDEZ

THE CROWDS were smaller and less rowdy this time though just as appreciative when boxing champ Manny Pacquiao finally capped his years in the ring with his resounding defeat of Timothy Bradley on Sunday.

However, they were unanimous in saying that he should give up his quest for a seat in the Senate (See related story).

At the Metropolitan Manila Development Authority (MMDA) gymnasium in Guadalupe, Makati City, there were fewer employees who watched the live streaming of the fight from  Las Vegas, Nevada.

Security personnel told the Inquirer that the venue was packed with more spectators when Pacquiao fought but lost to undefeated fighter Floyd Mayweather Jr. in May last year.

But to Ronald Molina, an MMDA employee, the number of people watching the fight was not an accurate way of determining the popularity of the People’s Champ.

Filipinos should instead remember that Pacquiao remains among the few who brought honor to the country, he said.

For MMDA Payroll Unit Head Lynette Vale, the fewer spectators at the agency this year was not a sign of the boxer’s waning popularity. It was just that the MMDA announced quite late to its employees that there would be a live viewing of the match at the headquarters, she added.

“Actually, I felt sad that few people were able to watch the live telecast since compared to  his fight against Mayweather, this one was more intense and full of action,” Vale said.

In what has been dubbed “the best fight of their trilogy,” Pacquiao won unanimously against Bradley, with all three judges giving him a score of 116-110.

For Kester Malhabour Bilbao, a proud member of the LGBT community and Sarangani native, Pacquiao once again proved that he was a true fighter and a Filipino champion. 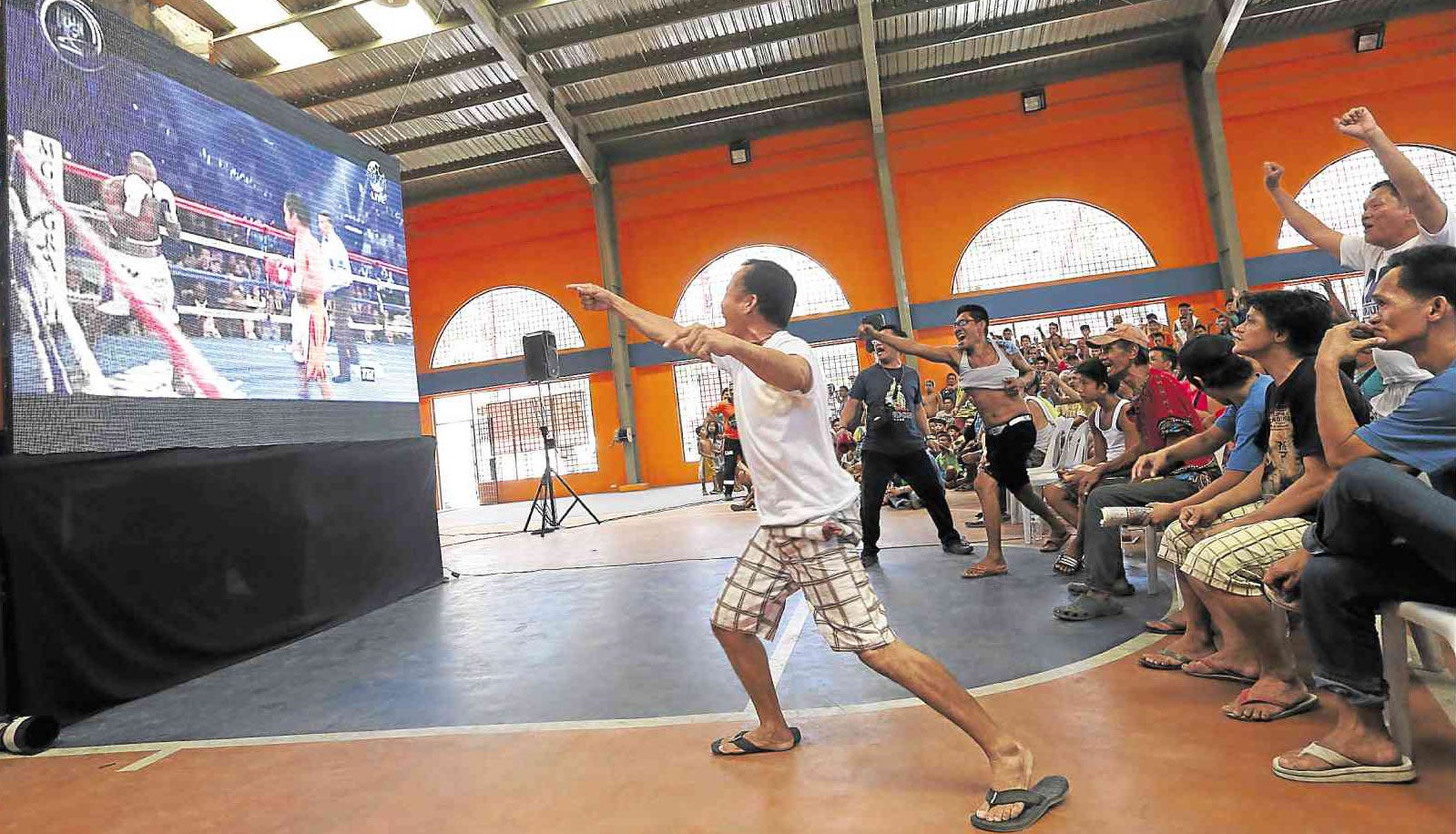 “He doesn’t need to redeem himself because he has already proven something in his whole boxing career and I think his comments about the LGBT community are separate [from what he has achieved as a boxer], he said.

Despite looking up to Pacman, however, Bilbao said he would not vote for him in the coming elections.

“Though he has a genuine heart to pursue his mission and vision in helping less fortunate Filipinos, being a senator is not the only way to reach out to these less privileged people,” he added.

His sentiments were echoed by boxing fan Loreto Escalada who told the Inquirer Sunday that while he has never failed to throw his support behind Pacquiao since he first faced off with Mexican boxer Erik Morales in 2005, he would not be as enthusiastic in backing Pacquiao’s Senate bid.

“There are many qualified candidates [for the Senate] and he has no background in crafting laws. I supported him purely because of sports, but not in politics because what’s at stake here is the future of our country,” said the 73-year-old Escalada who was among the around 500 people who watched Pacquiao’s match at the Marikina Freedom Park in Barangay Sta. Elena.

Interestingly, the fight failed to draw as much viewers as his more recent bouts with Chris Algieri in November 2014 and Mayweather last year. In Marikina, a large portion of the open-air venue remained empty when in previous fights, spectators had to climb up trees just to get a view of the match shown on a mobile LED screen.

The atmosphere in the venue was also noticeably less enthusiastic than in previous years.  With a report from Aie Balagtas See