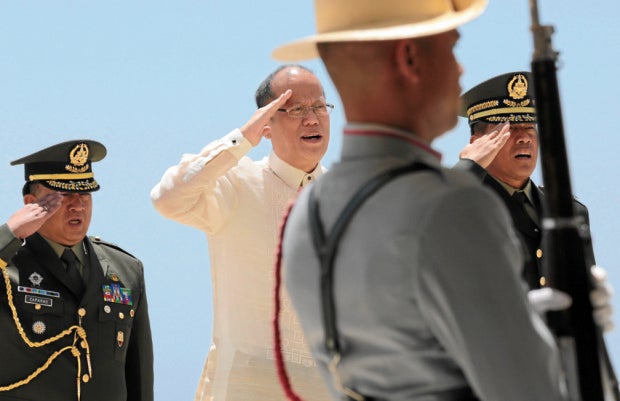 PILAR, Bataan—President Benigno Aquino III on Saturday emphasized the need for unity among nations in these times of conflict and uncertainty, saying apathy ultimately leads to the detriment of the people.

Mr. Aquino led the 74th commemoration of the Day of Valor held at Mt. Samat Shrine in Bataan, his last as President.

“What is the most important lesson we learned from World War II? It is clear: During times of chaos and disorder, any free country—even those who aren’t part of either side engaged in conflict—cannot stand idly by or remain quiet,” the President said in his speech.

“If we do not address the root of the problem, then we will certainly reach a point where the problem will worsen, until we reach the point where no country can avoid it,” he said.

“All nations live in, and share, one world, which is why the problems of one become the problems of all. If there are challenges in other parts of the world, however far away, we must still participate and contribute to the solution. If we allow these challenges to grow, then, in the end, we will only be affected by their negative effects,” he said.

Mr. Aquino cited the recent terrorist attacks in Europe, rooted in the conflict in the Middle East—the civil war in Syria, which gave rise to the Islamic State jihadist group and the refugee crisis.

But the President might as well be alluding to the Philippines’ territorial dispute with China in the South China Sea, about which US Ambassador to the Philippines Philip Goldberg was categorical in his own speech.

For the past six years, Mr. Aquino has campaigned for a multilateral approach to resolving the dispute, tirelessly asking the 10-member Association of Southeast Asian Nations to get China to agree to a binding code of conduct in the disputed waters.

President Aquino also brought the dispute to the United Nations for arbitration. A decision by the UN Permanent Court of Arbitration is expected in the coming weeks.

China has sharply criticized the Philippines for trying to draw other countries into the dispute.

But the United States, which sees China’s expansionist ambitions in the South China Sea as a threat to peace and stability in the region, is strengthening its security ties with the Philippines, Japan and Australia, and has called on Beijing to cease destabilizing actions in the disputed waterway and respect the UN tribunal’s decision.

China has built artificial islands on disputed reefs in the Spratly archipelago and developed military facilities there, including runways and radar installations, to bolster its claim to almost the whole of the South China Sea, parts of which are claimed by Brunei, Malaysia, the Philippines, Vietnam and Taiwan.

Other Asian countries are also seeking stronger military ties with the United States in the face of China’s expansionism, according to US Secretary of Defense Ashton Carter.

“Almost all the nations (in Asia) are asking us to do more with them . . . bilaterally and multilaterally,” Carter told the Council of Foreign Relations think tank in New York on Friday before heading off on a trip this week that includes visits to India and the Philippines.

In their speeches at Saturday’s event, Goldberg and Japanese Ambassador to the Philippines Kazuhide Ishikawa emphasized their countries’ strategic partnerships with the Philippines.

“Our three nations have developed strong and enduring relationships, the Philippines and Japan are among the United States’ most steadfast allies and we have all continued to work together to strengthen the stability and the security of the entire Pacific region,” Goldberg said.

He noted that the annual Balikatan joint military exercise “is a symbol of our alliance and the ironclad commitment of the United States to the Philippines.”

Japan’s Self-Defense Force is taking part in this year’s war games, which began on April 4 and would end on April 16, as an observer.

“When allies face problems and challenges, we do so together. This is a commitment that has been reciprocated many times by many brave Filipinos during World War II, the war in Korea, Vietnam and more recently the war against violent extremism,” Goldberg said.

“Our agenda in the 21st century may include new issues and interests such as maritime security and domain awareness, the rule of law and settling disputes, especially in the South China Sea, West Philippine Sea, humanitarian assistance and disaster relief just to name a few,” he said.

The West Philippine Sea is part of the South China Sea within the Philippines’ 370-kilometer exclusive economic zone.

Goldberg took note how, through the years, the Philippines, the United States and Japan were able to repair broken relations and moved on from the horrors of the war.

“Seventy-four years ago, our three nations were locked in a deadly struggle that devastated much of the region, now we are allies, friends and strategic partners,” he said.

“When our nations come together, we do so for the benefit of all, whether in response to an earthquake or typhoon or in an exercise like Balikatan, where I’m very proud to say Japanese Self-Defense Force personnel are attending as observers this year,” he added.

For his part, Ishikawa said Japan remained committed to the path it had taken as a “peace-loving nation in the past 70 years.”

“Japan is determined to make greater contributions to peace and security and prosperity for the international community,” Ishikawa said.

“We are very pleased to continue working closely with the Philippines, United States and all of our partners that share those fundamental values such as democracy, freedom, human rights and the rule of law,” he said.

When Bataan fell into the hands of the Japanese in 1942, thousands of Filipino and American soldiers who became prisoners of war endured the 106-kilometer Death March from Bataan to Pampanga.

Japan has repeatedly apologized for its aggression during the war.

“Please allow me to bow my head once again with profound grief and sincere condolences before the souls of all who perished here,” Ishikawa said. With a report from AFP/TVJ

US envoy pays tribute to Filipino airman who died during Balikatan