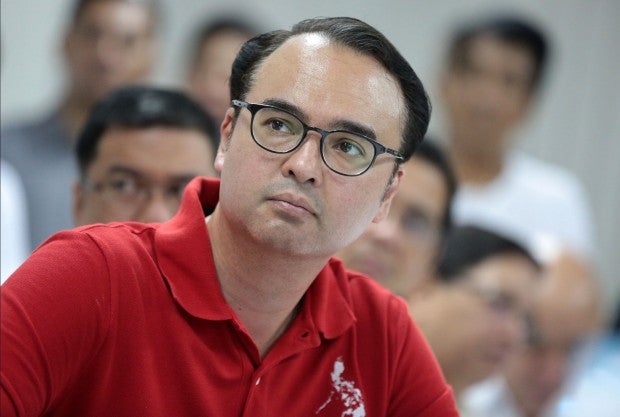 During a Senate hearing on the violent dispersal of protesting farmers in Kidapawan City, Cayetano blamed the administration for the delay in the release of adequate funds to mitigate the ill effects of the drought in the province.

Malacañang earlier called the senator’s claims as “untrue and unfounded,” saying that since the creation of an El Niño Task Force, enough resources were deployed in affected areas.

Cayetano remained firm in his stand and even accused the administration of lying to the public.

“Governor Mendoza, who happens to be a Liberal Party (LP) member, told us herself during the hearing that their local government wrote a letter to the national government to ask for assistance, but nothing came,” Cayetano said, referring to North Cotabato Gov. Emmylou Taliño-Mendoza.

“We should end all lies and excuses. We actually have P45 billion worth of funds in the 2016 budget that may be used for projects that will curb the impact of this crisis,” he said.

Cayetano said that if the national government had immediately taken action, thousands of farmers would not have staged a protest, and the tragic incident in Kidapawan could have been avoided.

The senator, who is running with Davao City Mayor Rodrigo Duterte, assailed the police’s lack of dispersal equipment which could have avoided the violence that killed at least two protesting farmers.

“But the Palace had abandoned the farmers of Kidapawan. It abandoned North Cotabato,” he said.

Cayetano particularly questioned the absence of Agriculture Secretary Proceso Alcala in the hearing on Thursday morning in Davao City.

He said he would have wanted the Cabinet member to explain his statement that the areas where the protesting farmers came from did not suffer much from El Niño.

Nearly all of Mindanao is suffering from drought due to rainfall shortage as the tail-end of an exceptionally strong El Niño coincided with the country’s dry season.

The weather bureau reported that 23 of the 27 provinces in Mindanao have received for some months now way below the normal amount of rainfall they usually get, which put them in drought or dry spell status.

While Mindanao is feeling the brunt of the impact of El Niño, 12 other provinces in Luzon and the Visayas are also suffering from drought or dry spell, according to the Philippine Atmospheric, Geophysical and Astronomical Services Administration (Pagasa).

Palawan in Luzon and Siquijor and Negros Oriental in the Visayas are also in drought.