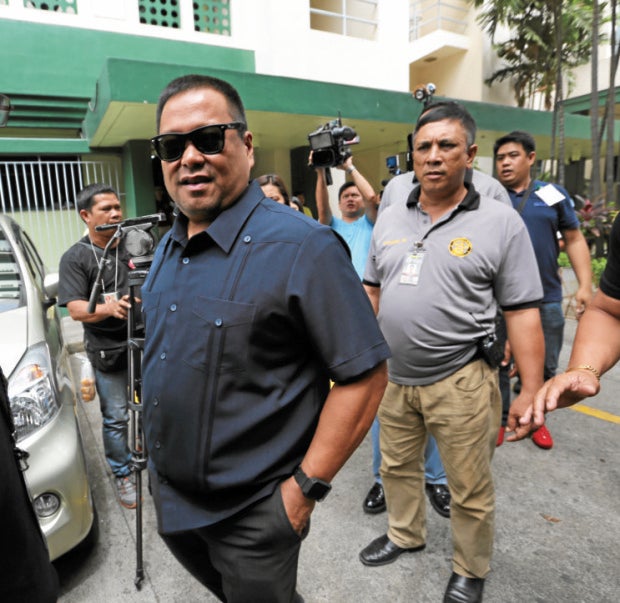 Sen. Joseph Victor “JV” Ejercito on Thursday posted P30,000 bail at the Sandiganbayan, which on Monday ordered him arrested for using municipal calamity funds to buy high-powered firearms for the San Juan police when he was mayor of the city in 2008.

Ejercito arrived at the Sandiganbayan in Quezon City before 9 a.m., paid his bail in cash and was booked by the Fifth Division clerk of court.

The Fifth Division issued a warrant for the arrest of the son of Manila Mayor Joseph Estrada on Monday after it found “sufficient grounds” to proceed with the graft and technical malversation charges brought by the Ombudsman.

After news of the arrest order spread on Wednesday, Ejercito issued a statement pleading his innocence and blaming his legal trouble on local politics in San Juan.

“I maintain my innocence and deny any wrongdoing in the purchase of high-powered firearms in 2008. I know I did nothing wrong, and that this case is undoubtedly politically motivated by oppositionists at the local scene,” Ejercito said, referring to former ally House Minority Leader Ronaldo Zamora and Zamora’s son, San Juan Vice Mayor Francis Zamora.

The younger Zamora is running against Ejercito’s mother, San Juan Mayor Guia Gomez, who is running for reelection in polls next month.

Francis Zamora is among 14 former and incumbent city officials charged with Ejercito.

“I trust that the court of law will conduct fair proceedings and exercise wise judgment,” said Ejercito, who was elected to the Senate in 2013 after serving one term in the House of Representatives.

Ejercito, who was mayor of San Juan from 2001 to 2010, claimed he was only thinking of “the protection and interests of the people of San Juan against lawless elements” when he approved the purchase of submachine guns for the city police in 2008.

The Ombudsman alleged that Ejercito conspired with other city officials to use the municipal government’s calamity funds to buy the firearms in February 2008.

Ejercito, according to the Ombudsman, tapped the city’s calamity fund to buy the firearms as “investment for disaster preparedness.”

The City Council passed a resolution authorizing the purchase of the firearms.

Guns not for relief

The submachine guns are made by Daewoo Precision Industries of South Korea and chambered for the 5.56mm ammunition.

The Ombudsman found the use of calamity funds for the purchase of the submachine guns irregular, as firearms are not among the things considered necessary for disaster relief and mitigation under a circular jointly issued by the Department of Budget and Management, and the Department of the Interior and Local Government in 2003.

Ombudsman prosecutors pointed out that San Juan was not under a state of calamity at the time of the weapons purchase.

They also charged that the firearms were acquired without competitive public bidding.

The prosecutors noted that the postqualification documents covering the acquisition of the firearms were dated earlier than the publication of an invitation to bid, showing that “unwarranted benefit, advantage and preference were accorded to the supplier.”

Read Next
Road diggings worsen traffic jams
EDITORS' PICK
What to watch out for when selecting a video surveillance solution
Palace warns sugar hoarders after raid on Pampanga warehouse
Metro Manila’s COVID-19 cases on downward trend, but surge not over — OCTA
Unleash the photographer in you this World Photography Day with vivo smartphones
House energy committee chair Arroyo bats for cheap electricity
Look Through: The fate of impounded stray dogs
MOST READ
WATCH: Rick Astley re-creates ‘Never Gonna Give You Up’ music video 35 years later
Man abducted in Batangas gasoline station, found dead in Quezon
DOJ indicts bank officer in $2.1 billion Wirecard fiasco
PNP bars US legislators’ visit to De Lima due to lack of authority from court
Don't miss out on the latest news and information.