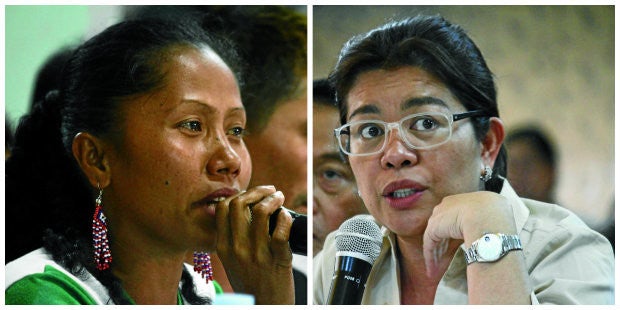 President Aquino should have taken decisive action and opened the rice granaries when protesters took to the streets of Kidapawan City to demand food from the government, Senate Minority Leader Juan Ponce Enrile said Thursday.

Had Mr. Aquino done so, the government would have known at once whether the protesters were legitimate.

“[Mr. Aquino] is a hollow symbol in our society right now. But even then, he should’ve acted on his own behest,” Enrile said at a Senate forum.

If he were President, he would have flown to Kidapawan, and ordered the distribution of rice to the protesters “to see whether that is a legitimate rally or just a contrived rally in order to provide a conflict or an encounter.”

“If they’re really hungry, they will disperse immediately because they want to cook the rice at least to satisfy their hunger,” he said.

Such a move would also have ensured the victory of the President’s chosen candidate, Mar Roxas, said Enrile, who criticized the Chief Executive’s slow decision-making. “If he went there and acted immediately and given them rice, nobody can beat Roxas,” Enrile said. “He missed the boat to make his candidate win.”

But the Aquino government has apparently learned nothing about running a country in six years, he said. He called Mr. Aquino a “three-day President,” one who takes too long to make a move.

“President Aquino is, at all times, focused on the important things that are happening in the country and the whole world to ensure the immediate response of government to all the needs of Filipinos in and out of the country,” Presidential Communications Secretary Herminio Coloma Jr. said.

“Perhaps, the reason behind the thinking of Senator Enrile is the style of governance that he was used to when he was a Cabinet official under former President Marcos under the dictatorship and martial law,” Coloma said.

Enrile said the administration was too focused on the concept growth, he added, but this just pertains to a number or the opinion of economists, he said. Hunger and fear, on the other hand, are immediately felt, he said.

He also said that in this democracy, or “demo-crazy,” authorities shoot at people because they have no training in handling social problems, as they don’t know the issues that affect the lives of the people they consider their bosses.

“That’s the problem if you were born  very rich. You don’t know the feeling of the downtrodden people,” he said.

The Kidapawan rally had ended in violence when police decided to disperse drought-hit farmers demanding aid from the government. Three protesters were killed.

But police said one of the slain protesters had a positive result during the paraffin test, indicating he may have fired a gun. Government officials also questioned the motive of protesters, saying their ranks had been infiltrated by leftists.

Enrile also took to task his colleagues in the Senate for initiating a probe on the Kidapawan incident but purportedly failing to inform fellow lawmakers about it.

Vice President Jejomar Binay said the protest in North Cotabato province demonstrated that poverty remained  a problem in the country. He lamented that the rally ended in violence.  “Everything must have to be handled with compassion,” Binay said.

In a statement, Sen. Ferdinand Marcos Jr. said Agriculture Secretary Proceso Alcala should explain how the agency’s budget was being spent.

“The DA has a big budget for 2016 but there is a possibility that it is being used for politics and not to support our farmers,” the vice presidential candidate said. For 2016 the total appropriation for the DA is at P48.45 billion, over P2 billion of which was set aside for El Niño mitigation programs.

“Seventy percent of the country’s poor are in agriculture… You cannot blame the farmers because they are hungry. You cannot fault them for fighting for their families’ survival,” Marcos said.

The International Association of Democratic Lawyers (IADL) called for the release of farmers still detained  and “to bring all those responsible to justice.”

IADL president Jeanne Mirer in a statement in New York said Mr. Aquino’s silence on the incident showed that the President “tacitly supported” the police action.

The Antwerp-based Progress Lawyers Network expressed “shock and outrage” over the dispersal, citing how the farmers were merely seeking government help as their livelihood suffered due to the dry spell wrought by climate change.

The Italian Association of Democratic Lawyers said the violent dispersal violated “the [farmers’] right to life and to be free from arbitrary detention.”

“We protest against such actions and the silence of the President,” said the Italian group.

The National Lawyers Guild International expressed its support for the National Union of People’s Lawyers in the Philippines in its efforts to seek “justice and accountability at the highest levels for those responsible for the killing of farmers in Kidapawan.” With reports from Christine O. Avendaño, Tarra Quismundo, Nikko Dizon and Jeannette I. Andrade