Baby girl at orphanage now a darling to many | Inquirer News

Baby girl at orphanage now a darling to many

BUKIT MERTAJAM, Malaysia — A baby girl at an orphanage has become a darling to many.

More than 100 people made a beeline to the orphanage in Bukit Tengah to see her, while also dropping off baby necessities such as milk powder – and even breast milk – after news about her spread on social media.

Others came with daily necessities such as rice, canned foods, bottled drinks, soya sauce, biscuits and even cash as a show of support to the orphanage.

Khaw said the telephone line had also been ringing non-stop. Nearly 1,500 calls from different states came in, with the callers wishing to adopt the baby who was handed over to the society on March 23.

“But we will not be giving her up for adoption. We are afraid that the kind-hearted strangers may not be able to take care of the baby properly as she has kidney problems and her treatment will cost a lot. 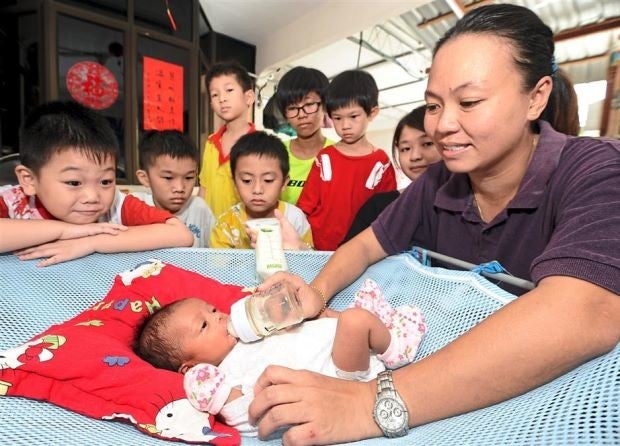 Bundle of joy: Khaw feeding the little one as other children at the orphanage in Bukit Mertajam look on. The Star/Asia News Network

“The baby was born on March 17. Her 23-year-old mother told us that she could not afford to keep her daughter after her boyfriend left when she was five months pregnant,” Khaw told reporters at the orphanage in Jalan Pengkalan here.

News about the baby became an Internet hit after some well-wishers, who visited the orphanage, got to know about her case and posted it online.

Khaw said the orphanage has 29 other children comprising 16 boys and 13 girls, aged between eight months and 17 years.