Muslim who greeted Christians on Easter killed by fellow Muslim 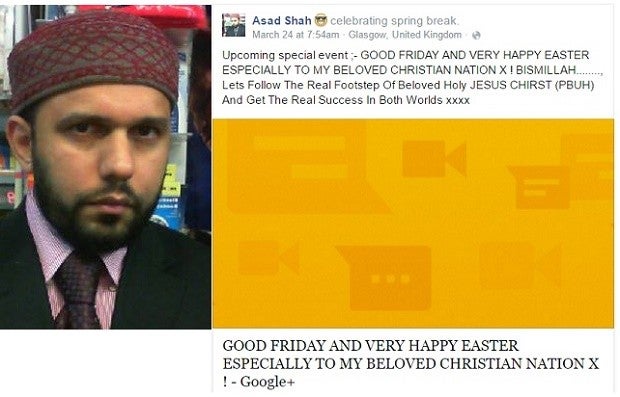 Shopkeeper Asad Shah was repeatedly stabbed by a fellow Muslim after he posted a greeting on his Facebook page, where he said “Very Happy Easter Especially To My Beloved Christian Nation.” He later died of his wound. SCREENSHOT OF ASAD SHAH’S FACEBOOK PAGE

LONDON, United Kingdom — A man accused of murdering a Muslim shopkeeper in Scotland’s largest city Glasgow issued a statement Wednesday saying he killed him because he disrespected the Prophet Mohammed.

Asad Shah, 40, was found with serious injuries outside his store last month and was pronounced dead at hospital. Police described the killing as “religiously prejudiced”.

Shah, an Ahmadi Muslim who moved to Glasgow from Pakistan in 1998, had recently posted a message on Facebook wishing people a happy Easter, “especially to my beloved Christian nation”.

Tanveer Ahmed, 32, from Bradford in northern England, appeared at a preliminary court hearing in Glasgow Wednesday and afterwards issued a statement through his lawyer admitting his guilt.

“Asad Shah disrespected the messenger of Islam the Prophet Muhammad peace be upon him. Mr Shah claimed to be a Prophet,” the statement said.

“If I had not done this others would and there would have been more killing and violence in the world.

“I wish to make it clear that the incident was nothing at all to do with Christianity or any other religious beliefs — even although I am a follower of the Prophet Muhammad peace be upon him I also love and respect Jesus Christ.”

The legal process against Ahmed, who is also a Muslim and is being held in custody, will continue. The date for his next court hearing has not yet been set.

Read Next
Strong quake strikes Vanuatu; no injuries or tsunami threat
EDITORS' PICK
‘Revolting’: 29,000 teachers left out after PS-DBM bought pricey, outdated laptops
House energy committee chair Arroyo bats for cheap electricity
Dengue cases in PH continue to swell: 92,343 as of July 23
TNT brings Sarah G and Mimiyuuuh together for epic collab
SMDC all set for growth, prepared to face market resurgence
Imee Marcos tests positive for COVID-19
MOST READ
Raffy Tulfo blasts ‘killjoy’ critics of Angara’s birthday party: It’s for charity
Homeowners of BF Homes in Parañaque protest opening of 5 gates to public
Jaya, family safe after house burned down in US
Bongbong Marcos to PNP: Use of force must be reasonable, justifiable and only when necessary
Don't miss out on the latest news and information.