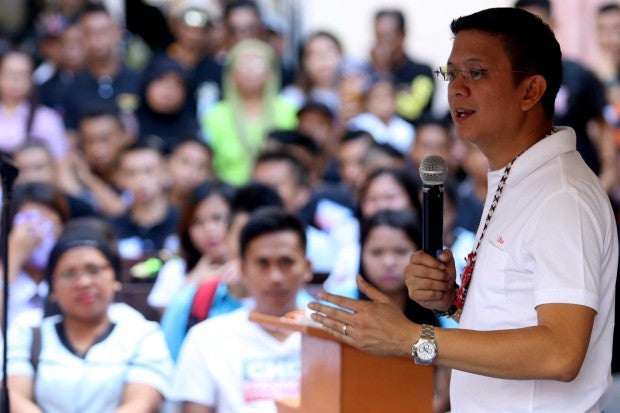 Filipino politicians named in the so-called “Panama Papers” must explain and should be held accountable if found to have committed any wrongdoing, vice presidential bet Francis “Chiz” Escudero said on Thursday.

The “Panama Papers” reportedly detailed transactions by a Panamanian legal company showing an insider’s view of the massive offshore wealth of prominent politicians and public figures in different parts of the world, including officials from the Philippines.

“If a Filipino politician is named in the Panama Papers, he or she should be held accountable if he or she committed any wrongdoing,” Escudero said in a statement.

“Filipinos named in the Panama Papers must explain why they opted to hide behind the veneer of questionable offshore companies,” he added.

Among those reportedly on the list of people linked to offshore financial dealings of the rich and famous were Ilocos Norte Governor Imee Marcos and her three sons, and Senator Joseph Victor “JV” G. Ejercito, son of ousted President and now Manila Mayor Joseph Estrada.

Escudero, who is running against Marcos’ brother, Senator Ferdinand “Bongbong”Marcos Jr., said this exposé underpinned the lifting of the country’s bank secrecy law on bank deposits of public officials.

“The scandal surrounding the illegally amassed deposits of public officials from around the world, including some of our own public officials, kept in secret foreign accounts is a renewed reminder that we should pass a law compelling all our state workers—from the president down to the lowest clerk—to sign a waiver on their bank deposits in favor of the Ombudsman,” he said.

“We’ve been repeatedly told and warned: a public office is a public trust. Every single peso of the people’s taxes should be handled with care, sincerity and honesty. Every peso paid by a taxpayer should be used to advance public good, not one’s private good,” he further said.

Escudero pointed out that since 2010, he has been submitting a written waiver on secrecy of his bank deposits attached to the Statement of Assets, Liabilities and Net Worth (SALN) he files annually with the Office of the Ombudsman.

In 2013, he filed a bill, compelling people in government, except those who serve in honorary capacity, to submit a written permission or waiver in favor of the Ombudsman to look into all deposits of whatever nature in banks within and outside the country. He first filed the measure in 2007 when he was first elected senator.

Escudero also recently called on all candidates to sign a waiver to assure the electorate that they would not enrich themselves once elected into office. IDL