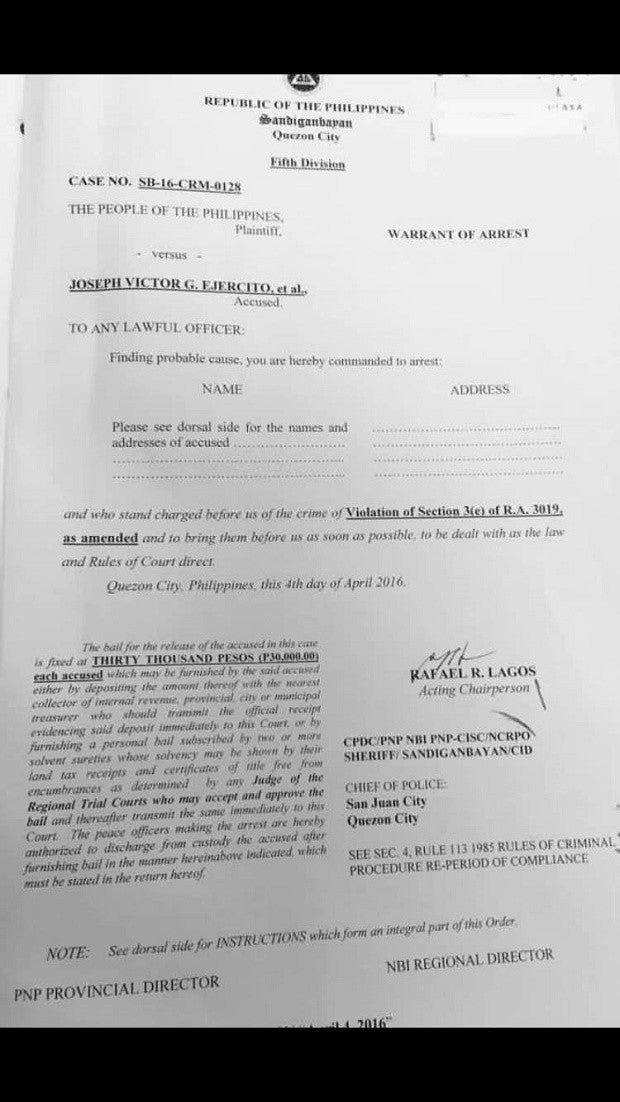 The Sandiganbayan Fifth Division on Wednesday issued an arrest warrant against Sen. JV Ejercito for graft over the allegedly anomalous purchase of high-powered firearms when he was San Juan mayor. Photo by Isa Avendaño-Umali, DZIQ.

The Sandiganbayan Fifth Division has issued an arrest warrant against Sen. Joseph Victor “JV” Ejercito in connection with his graft charge over the allegedly anomalous purchase of high-powered firearms when he was San Juan mayor.

The court issued the warrant after it found probable cause to try Ejercito for graft.

The court set the bail amount at P30,000 for one count of graft, according to the warrant signed by acting chairperson Associate Justice Rafael Lagos and served to the San Juan city and Quezon city police chief.

Ejercito was charged for graft over the anomalous purchase of high-powered rifles worth P2.1 million when he was San Juan mayor in 2008.

Ejercito was also charged with technical malversation with San Juan Vice Mayor Francis Zamora over the anomalous purchase of the firearms.

Zamora and Gomez will run against each other for San Juan mayor in the coming May 9 polls.

The Sandiganbayan Sixth Division has yet to issue the arrest warrant against Ejercito and Zamora.