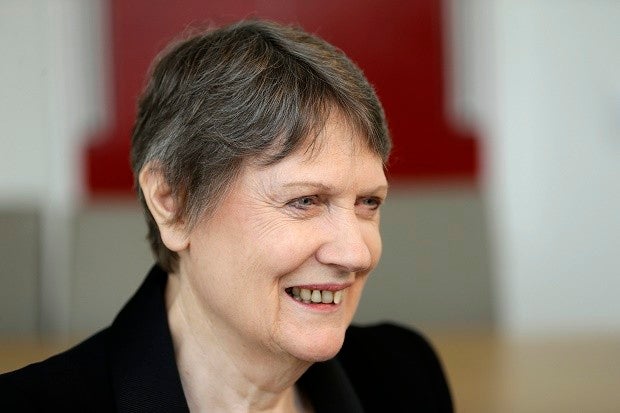 Helen Clark, the former Prime Minister of New Zealand and senior United Nations official, speaks during an interview in New York, Monday, April 4, 2016. Clark has announced she is running for the top position at the U.N. with the backing of the New Zealand government. AP

WELLINGTON, New Zealand — Helen Clark, a former New Zealand prime minister who is now a senior UN official, announced Tuesday she is running for the top position at the United Nations, saying she would bring nearly 30 years of leadership skills to the job of secretary-general.

Clark is the eighth candidate, and the first from outside Europe, to enter the race to succeed Ban Ki-moon, whose second term expires at the end of this year. Some in the UN are pushing for a woman to take the top role for the first time and some, including Russia, argue that Eastern Europe has never had a secretary-general and it’s their turn.

New Zealand Prime Minister John Key said he had personally raised the possibility of a Clark candidacy with President Barack Obama and other senior US officials when he was in Washington last week and didn’t get any pushback. Key said he will make a similar appeal to President Xi Jinping when he visits China later this month.

The New Zealand government on Tuesday formally nominated Clark, and Key said the wishes of the permanent members of the UN Security Council, known as the P5, would have a big influence.

“I could make a very strong case to you that Helen Clark’s credentials are far better than any other candidate that is currently on the list, or anyone that I’m aware that might put their name forward,” Key said.

“But unfortunately, in the world of multilateralism, things aren’t quite as simple as that. There is a lot of horse-trading that goes on. It will depend enormously on the views of the P5 and ultimately if they feel it’s the turn of the Eastern Europeans or someone else.”

Clark was prime minister for nine years until 2008 and has headed the UN Development Program for the past seven years. In an interview with The Associated Press, Clark said she thought the position was open despite the wishes of Russia.

“I think on the basis of what I’ve done in my life I’ve got the skills to do this,” she said. “I have led a small country in the South Pacific for nine years. I’ve been in leadership positions really going back close to three decades.”

She said that if she were to win the post, a top priority would be dealing with conflict caused by civil wars and violent extremists, something which would call for taking another look at the UN’s toolkit. She said she thought she could bring a modernizing touch to the organization.

“I think it’s probably fair to say that as an administration it can be a little clunky and a little old fashioned,” she said.

She said she wasn’t campaigning as a woman candidate but rather as the best person for the job. She said she came from a diverse region of the world.

“So I know a lot about working with diversity and embracing diversity, and seeing whether it’s possible to find some unity and consensus,” she said.

Key said New Zealand’s role as a nonpermanent member of the Security Council probably helps Clark’s candidacy because its diplomats are mixing in those circles.

The UN General Assembly will begin preliminary meetings with candidates in New York next week.

READ: Only 1 woman on UN Security Council–from the United States