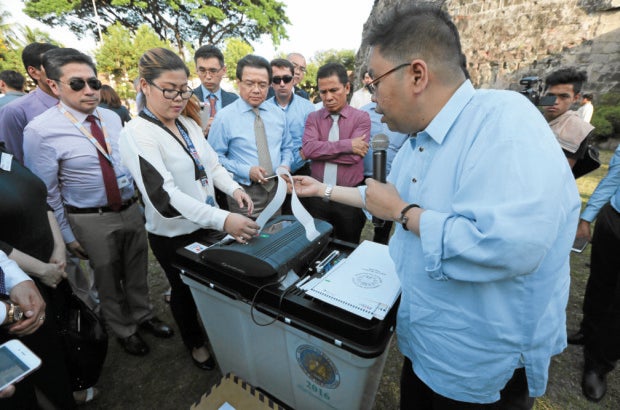 Commission on Elections (COMELEC) spokesman James Jimenez shows how the voting machine works during the special demonstration for diplomats of the vote counting machine to be used in the 2016 National and Local Elections at the Baluarte de San Diego Gardens in Intramuros, Manila on Monday, April 4, 2016. INQUIRER PHOTO / GRIG C. MONTEGRANDE

THE ON-SCREEN verification feature of the vote counting machines (VCM) to be used in the May 9 elections will be activated for only one second before the voter receipt will be printed.

The onscreen feature was originally meant to be activated for 15 seconds to allow the voter to quickly read through the data captured by the VCM.

“We reduced it to one second. If we had it on for 15 seconds, it will add up four hours to the voting time,” Comelec spokesperson James Jimenez explained on the sidelines of the poll body’s special demonstration of the VCMs for members of the diplomatic community.

The Comelec decided to reduce the on-screen verification of votes to only one second after the Supreme Court required the Comelec to print voting receipts.

With the voting receipts, the Comelec considers on-screen verification a redundancy.

The Comelec could have turned off the on-screen verification function, but this would require the poll body to modify the source code of the VCMs.

Jimenez also said that a voter could air his objections on election day.

However, the Board of Election Inspectors (BEI) cannot resolve his protest on the spot.

According to him, the BEIs can only note objections for future election protests.

Read Next
Marikina gets first crack at dengue vaccine
EDITORS' PICK
Smart brings KCON:TACT especially 4U to subscribers from June 19 to 27
He called bank: SJ Belangel aimed for backboard on game-winner vs Korea
Smart celebrates all kinds of ‘#SimplyLove’ for Pride Month
Leo Martinez pleads for senior citizens to be allowed to go out
IATF recommends to Duterte face shield use in all enclosed areas
Red, yellow alerts in Luzon grid possible in coming weeks — DOE
MOST READ
Notes for next president: Huge debt, unemployment, hunger
Pacquiao ‘good choice’ as PDP-Laban standard bearer for 2022 – Koko Pimentel
DepEd chief Briones lying, teachers insist
Lakas-CMD to solidify alliance with Inday Sara’s HNP – Romualdez
Don't miss out on the latest news and information.

Do not get drawn into their game