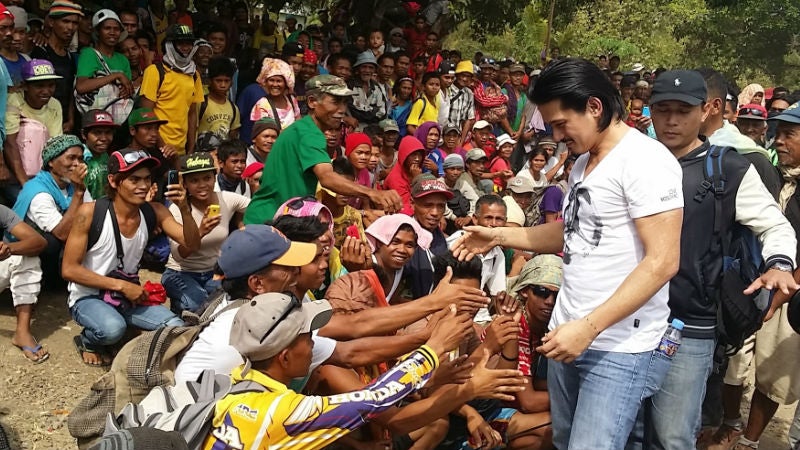 Actor Robin Padilla giving moral support to the protesters during his visit at the methodist compound in Kidapawan City, Saturday. PHOTO BY ALLAN NAWAL

MOVIE STARS  Robin Padilla and Anne Curtis sent emergency aid to some 4,000 protesters encamped at Spottwood Methodist Center in Kidapawan City after their bloody dispersal as human rights groups pleaded to the government and police to lift a food blockade for victims of the prolonged El Niño drought.

Outside the church compound, police blocked some 300 farmers from Makilala town seeking a share of 400 sacks of rice donations from Padilla, Curtis and other individuals and civic organizations.

Three farmers were killed and at least 100 were wounded when gunfire erupted during Friday’s violent dispersal by the Philippine National Police of peasants seeking government relief from the dry spell that had caused widespread losses in their farms.

In Manila, the Commission on Human Rights (CHR) slammed the police and local authorities for blocking the delivery of food and other donations to the farmers.

CHR Chair Jose Luis Martin “Chito” Gascon said that efforts to block this humanitarian support would violate the right of individuals to have access to food, medicine, clothes and temporary shelter.

“All citizens should be free to receive help and support from other individuals or private and public institutions especially in the context of a crisis, albeit temporary,” Gascon said in a text message.

Gascon said that the CHR was still gathering information on the deadly clash and urged “anyone who has relevant information to come forward.”

Zarate said that these rice donations were supposed to be distributed Monday to the farmers before they go back to their farming communities.

“There is now virtual martial law in Kidapawan. It is highly outrageous and illegal for these police officers to block and deny some 300 farmers from receiving their share from the rice donated by concerned citizens and private groups,” Zarate said.

Zarate said Bayan Muna would file criminal and administrative charges against the police unless they pull out from the church grounds and allow the delivery of food and other donation or  charges for  the food blockaded.

Bayan Muna Rep. Neri Colmenares confirmed that his group was helping the farmers with food supplies because the government has refused to answer their appeal for help for food in the past few months.

The senatorial candidate said the government had not only ignored the farmers’ plea for food but apparently wanted them to starve by blocking the delivery of donations.

Colmenares was reacting to presidential spokesperson Edwin Lacierda’s claim that the Left was aiding the farmer protesters and that they themselves instigated the violent clash between police and protesters last Friday.

“It’s not enough that you ignore their pleas for food, Mr. Lacierda? You actually decry the fact that people help them with food? Would you rather they starve? Is that why armed cops are blocking other farmers to partake of rice given by others?” Colmenares said.

He added that  the government had been evasive and has refused to condemn the police attack against the farmers despite the fact that three farmers died and dozens were injured due to police aggression.

Former CHR Chair Etta Rosales warned that some “provocateurs” were out to exploit the situation.

“The government might mean well in addressing the drought situation but it’s really the slow bureaucratic processes that become obstacles because when farmers are unable to access government resources,” Rosales said.

Rosales said North Cotabato Gov. Emmylou Mendoza and Agriculture Secretary Proceso Alcala could still “redeem” the situation in favor of the farmers by ensuring that the farmers get relief quickly.

Sen. Gregorio Honasan II, who is running for Vice President and was campaigning in Baguio City, announced he had called for a Senate inquiry into Friday’s violent dispersal in Kidapawan. He said the incident was a “symptom of social inequality, of social injustice.” 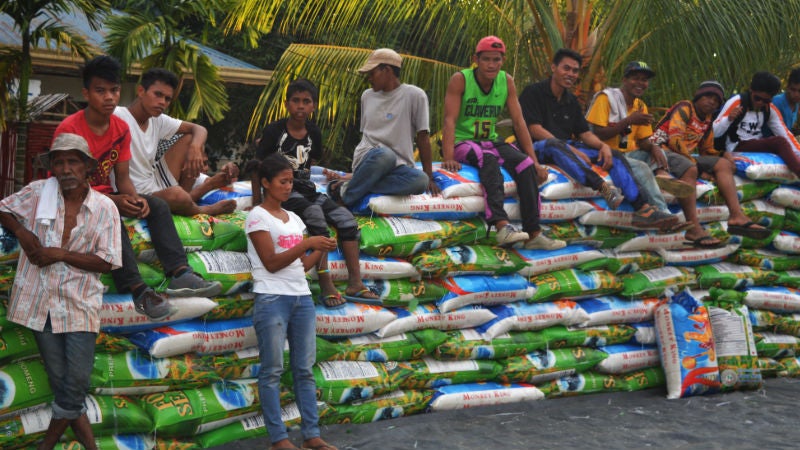 Protesters sit on the files of bags of rice inside the United Methodist Church in Kidapawan City. Action star Robin Padilla visited the protesters on Saturdat afternoon and donate at least 200 bags of commercial rice to the hungry protesters. Williamor A. Magbanua

The Senate committee on justice, chaired by Sen. Aquilino Pimentel III, will hold a public hearing on the matter on Thursday in Davao City.

ACT-CIS party list Rep. Samuel Pagdilao Jr., a senatorial candidate, urged Malacañang to launch an independent investigation into the bloody incident. “We must remember that a hungry stomach knows no law. At the very least, the farmers chose to stage a protest rather than resort to violent means to get what they asked for,” he said.

In General Santos City, at least 200 protesters barricaded the highway  fronting the National Food Authority office on Monday morning for one hour, to urge the government to maximize all resources to help  drought-stricken farmers and to denounce the violent dispersal of farmers  in Kidapawan City.

He said although some local government units provided aid, it was not enough. “It is alarming that the Aquino government is still very silent and has not  yet done anything significant to help the farmers. What is more terrifying is that  they sent bullets instead of rice,” Lariba said.

At the provincial capitol, hundreds of residents gathered for a four-hour prayer rally for peace and reconciliation sponsored by the provincial government. “We need not fight. We are brothers and sisters despite our belief,  religion and political affiliation,” a protestant pastor appealed.

North Cotabato Board Member Loreto Cabaya said the participants voluntarily came, dismissing reports that Governor Mendoza was shelling out P50,000 for each barangay.

In Los Angeles, more than 50 community activists held a rally in front of the Philippine Consulate on Saturday to condemn the bloody dispersal.

Roy Padilla, a pastor at Rosewood United Methodist Church (UMC) in Los Angeles who spoke at the rally, praised the UMC in Kidapawan for supporting and providing sanctuary to the farmers, saying it “helped people take a stand in their faith and in their love for others.”  With reports from DJ Yap, Christine Avendaño and Nimfa U. Rueda, LA correspondent

Read Next
Roxas turns to another Arroyo ally – Pichay of Surigao Sur – for poll support
EDITORS' PICK
Gear up and get ready to play with Yamaha Mio Gear
If elected VP, Sara Duterte will push for mandatory military service for all Filipinos
Over 3 Million worth of prizes to be won at Smart Padala’s SENDali Manalo Promo!
Acer starts the year off strong with the Aspire Vero National Geographic Edition
Senate bill seeks to penalize employers requiring employees to work during rest hours
Marcos-era elections: Not what his son signed up for
MOST READ
Vice mayor slams Vico Sotto for turning Pasig into a ‘puro palabas’ city
Jose Manalo’s son Benj pays tribute to late mother: ‘You’re a testimony of God’s love’
‘Sampal sa gobyerno:’ Drilon wants unvaxxed PAO chief barred from working
Bongbong-Sara tandem names 7 candidates in initial senatorial slate
Don't miss out on the latest news and information.