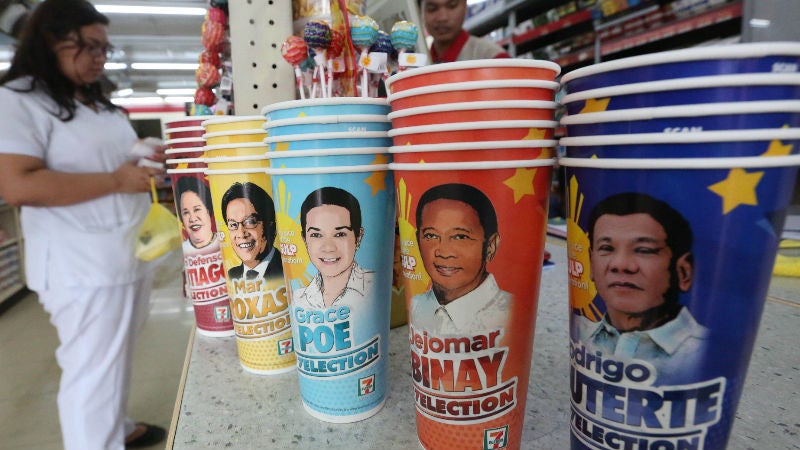 The Presidentiables- Presidential candidate’s faces are printed on a soda cup at a convenience store in Manila, in an experiement to see who the customers will choose for President. As of April 2, 2016, most of Sen. Grace Poe’s soda cup has been used and bought, followed by Davao Mayor Rodrigo Duterte, Sen. Miriam Santiago, VP Jejomar Binay and Mar Roxas. INQUIRER/ MARIANNE BERMUDEZ

The tough-talking presidential candidate was the preferred candidate of 58 percent of Philippine Seven Corp.’s customers who bought more than half-a-million “7-Election cups” in its 1,650 outlets throughout the country from March 23 to April 1.

Interestingly, none of the other candidates in the race for Malacañang come second to Duterte as 14 percent of the participants in the mock poll said they were still undecided on their presidential candidate, a month before the May 9 elections.

“This may be indicative of the need for the candidates to work harder,” Philippine Seven Corp. marketing communications division head Emmanuel Lee Esguerra said Friday.

Sen. Grace Poe placed third in the mock poll, taking 11 percent of the vote. She was followed by Sen. Miriam Defensor-Santiago (6.3 percent) and Vice President Jejomar Binay (5.9 percent). Administration candidate and former Interior Secretary Mar Roxas was the least preferred candidate of 7-Eleven’s customers, taking only 4 percent of the vote.

Esguerra pointed out the results of the 7-Election cups campaign, which will run until May 2, are “unofficial and unscientific.”

Launched in the United States during the 2000 presidential elections, the 7-Election campaign predicted the wins of former President George W. Bush over then Sen. John Kerry in 2004 and President Barack Obama over Sen. John McCain in 2008.

The campaign was introduced in the country during the 2010 presidential elections. At the time, Esguerra said their mock polls had Benigno Aquino III winning 38 percent of the vote. The official Commission on Elections result would later show him winning 42 percent of the total votes cast.

Achilles Martinez, Philippine Seven Corp.’s team leader for Postmix and Slurpee category, said Duterte took the lead in their poll despite the fact that around 80 percent of their company’s stores are located in Luzon.

Meanwhile, Duterte won the heart of a nonvoter—an 11-year-old girl—during a campaign sortie in Cebu.

Kathleen de la Fuente, of Naga City in Cebu, gave Duterte a jar full of coins she had been saving since September after he gave a speech in Toledo City.