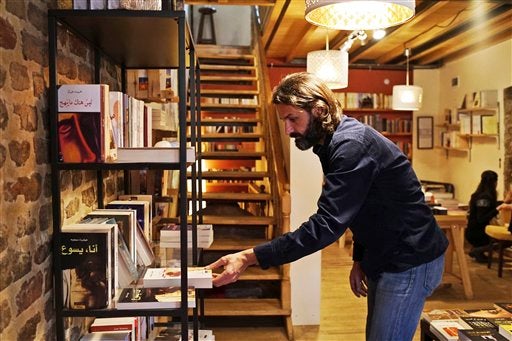 In this photo taken on Friday, April 1, 2016, Syrian refugee Samer Al-Kadri, founder and owner of Pages, a rustic three story-Arabic language bookshop, removes a book at his store in Istanbul, Turkey. The bookstore has become an anchor for many Syrians who have stayed put in Turkey but crave a taste of home. (AP Photo/Bram Janssen)

Istanbul— A rustic, three story-Arabic bookstore in old Istanbul has become an anchor for many Syrians who have stayed put in Turkey but crave a taste of home.

The founder and owner of Pages, Samer al-Kadri, a refugee himself, says the store strives to be a bridge between Syrians, Turks and the myriad of foreigners who visit the city.

Its weekly program includes music concerts and, starting soon, language exchanges in Arabic, English and Turkish. Books are available in all three languages. Al-Kadri is acutely aware that the language barrier “has made it difficult for Syrians to really integrate into society.”

Turkey is hosting 2.7 million Syrian refugees and is due to receive many more under a plan with the European Union that aims to halt the smuggling of migrants into Europe. The deal stipulates that for every Syrian returned, another Syrian in Turkey will be relocated to a European country.

The plan has drawn considerable criticism from human rights groups, who worry that Turkey is not a suitable haven for asylum-seekers and fear it could pave the way for mass deportations. Amnesty International says Turkey has already scaled down its registration of Syrian refugees and is illegally sending back refugees to its war-torn neighbor.

The Turkish Foreign Ministry denies this and says the country maintains its open-door policy and adheres to the principle of not returning Syrians.

In the eyes of many Syrians, the deal has rendered them pawns in a political bargain that benefits everyone but them. 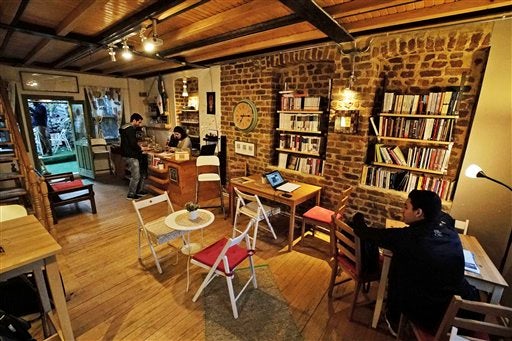 Ola Suleiman, a new employee at the bookstore, says there’s a touch of “evil” to the deal because “they are deciding the fate of a people.”

While her middle-class family is among the Syrians who are doing better for themselves in Istanbul, it hasn’t been easy. The cost of life in Turkey is far higher than in pre-war or even post-war Syria. Most Syrian refugees live outside the camps and largely fend for themselves.

Suleiman and her siblings work six days a week without vacation just to keep their household afloat. Technically many Syrians do not have the right to work. Suleiman does not have a work contract let alone health insurance. This, she says, leaves Syrian workers vulnerable to exploitation while allowing Turkish business owners to evade taxes.

Turkey has committed to giving work permits to its Syrian “guests” but there are signs this perk may be riddled with caveats.

Still, Suleiman likes working in a bookshop and treasures the precious moments that allow her to read once again. It is a feeling shared by many customers, including Faiz Dakhil, who loves the scent of books and says this place makes him “feel at home.” 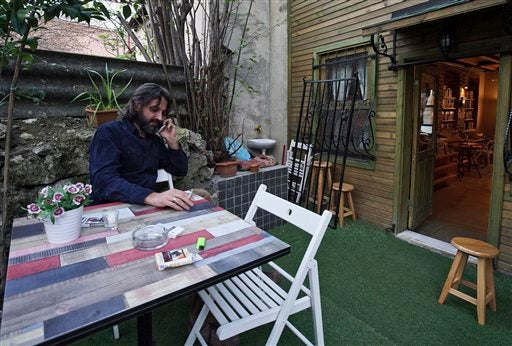 In this photo taken on Friday, April 1, 2016, Syrian refugee Samer Al-Kadri, founder and owner of Pages, a rustic three story-Arabic language bookshop, sits outside his store in Istanbul, Turkey. AP

Al-Kadri, Suleiman and Dakhil have stayed in Turkey because they want to be able to return to Syria as soon as the war is over. But those who fled to Europe have cut their losses and are dreaming of a better future elsewhere. For them, it will be extra hard to start a new life in Turkey.

“I hope that everyone who left with the intention of improving their situation can complete his journey, doesn’t return to Turkey,” says Dakhil. TVJ