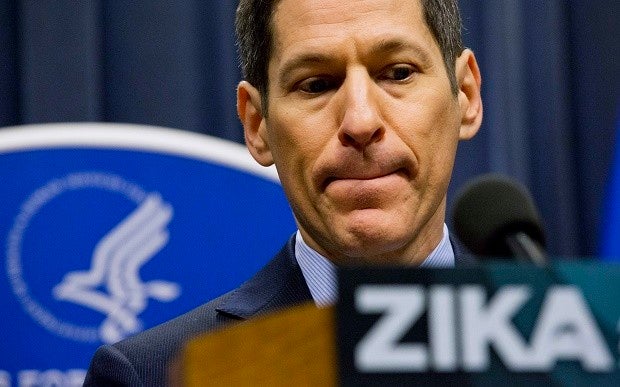 Centers for Disease Control and Prevention Director Dr. Thomas Frieden speaks during a press conference at a one-day Zika summit Friday, April 1, 2016, in Atlanta. The government is urging health officials from around the country to prepare for potential outbreaks of the mosquito-borne virus in the US. AP

ATLANTA — The US government urged health officials around the country Friday to get ready now in case there are outbreaks of the mosquito-borne Zika virus this summer.

A Zika epidemic has been sweeping through Latin America and the Caribbean, and officials think it’s likely some small clusters of Zika will occur in the US when mosquito numbers boom.

When West Nile virus, transmitted by a different mosquito, moved through the US about 15 years ago, health officials were caught flat-footed, Dr. Georges Benjamin, executive director of the American Public Health Association, told a Zika summit at the Centers for Disease Control and Prevention.

The Zika virus causes only a mild and brief illness, at worst, in most people. But in the last year, infections in pregnant women have been strongly linked to fetal deaths and to potentially devastating birth defects, mostly in Brazil.

The virus is spread mainly by Aedes aegypti mosquitoes, which also live in parts of the US It was thought to be mainly in the South, but the CDC revised its map this week, showing the mosquito has been found in parts of the Midwest and Northeast.

The Obama administration in February requested nearly $2 billion in emergency funding for Zika response work. Congressional leaders have not formally voted on the request.

READ: CDC: Zika infections confirmed in 9 pregnant women in US

Officials don’t expect Zika to be a big problem in the US for a number of reasons, including the widespread use of air conditioning and screens. The Zika mosquito likes to bite indoors.

So far, there have been no Zika infections in the US caught from mosquitoes. More than 300 illnesses have been reported, all linked to travel to outbreak regions.

About 350 additional cases have been reported in US territories, most of them in Puerto Rico, where mosquitoes are already spreading the virus. Together, dozens or even hundreds of births in the 50 states and territories could be affected in devastating ways by Zika, said Dr. Edward McCabe of the March of Dimes.

“We have a few short weeks to stop the Zika virus from gaining a foothold,” McCabe said.

READ: American tested positive for Zika virus while in PH—DOH

Read Next
Russia accuses Turkey of arming extremists in Syria
EDITORS' PICK
Editorial: Unusual haste
New Year, New Rediscoveries
Driving can be even more rewarding this New Year — here’s why
Tracing app pesters MRT commuters
Experience clearer calls nationwide with Smart VoLTE
Senate probe foils vaccine overpricing
MOST READ
Duterte to firms: No franchise until you settle your accounts with gov’t
7 copassengers of UK variant patient can’t be traced
Norway advises caution in use of Pfizer vaccine for the most frail
#DefendUP trends after DND scraps agreement with UP
Don't miss out on the latest news and information.