UP fire: Loss heavier than P3M 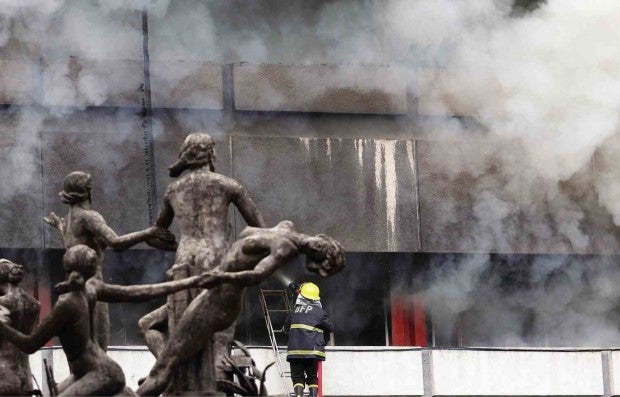 ‘STATE U’ INFERNO The predawn fire on Friday raged for 10 hours, destroyed treasured academic materials, and left a deep scar on the University of the Philippines campus in Diliman, Quezon City. NIÑO JESUS ORBETA

“The losses were incalculable,” University of the Philippines Diliman Chancellor Michael Tan said following the 10-hour fire that hit the UP Faculty Center, where a wealth of books, research and archival materials went up in flames.

The fire that broke out early Friday morning started in a room on the third floor of the 5-decade-old structure also known as Bulwagang Rizal, which is used by faculty members of the College of Arts and Letters (CAL) and College of Social Science and Philosophy (CSSP).

Supt. Jesus Fernandez, the Quezon City fire marshal, said the fire reached Task Force Alpha—with 50 fire trucks responding—at 2:25 a.m. and was declared out at 11:25 a.m. There were no reported injuries except for a fireman who sustained a cut in the hand.

The fire affected the faculty of all the departments of CAL and the CSSP departments of history, anthropology, linguistics and philosophy, Tan said in a statement.

It was the third fire to hit the UP Diliman campus in nine months. On June 13, 2015, flames engulfed the College of Arts and Sciences Alumni Association (Casaa) food center, and then the UP Alumni Center bowling alley on June 30.

An investigator, SFO4 Jose Felipe Arreza, noted the “possibility of late (information) dissemination about the fire in progress.” In a report, he said security guards alerted the UP police about the fire at 1:13 a.m. Meanwhile, the police hotline 117 received a call about it from a concerned citizen at 1:20 a.m.—and that was the only time the Bureau of Fire Protection (BFP) was alerted, he added.

The fire was already on the Third Alarm (a status requiring at least 13 fire trucks) when the first firemen arrived at 1:26 a.m., Arreza said.

Officials estimated the damage at P3 million. But, like Tan, members of the UP community said more than just school property were reduced to ashes but also personal treasures that enrich academic life in the country’s premier state university.

“The faculty center is gone. Lost many books, furniture pieces from my parents and grandparents, paintings from friends and former students, precious memorabilia. Sic transit gloria mundi (Thus passes the glory of the world),” professor and assistant vice president for public affairs Jose Wendell Capili said on his Facebook account.

Tan said the center and its parking area would be off-limits starting on Friday as the BFP investigates the cause of the blaze. The building’s structural integrity will be checked, while temporary offices are being arranged for some 140 CAL and 80 CSSP faculty members.