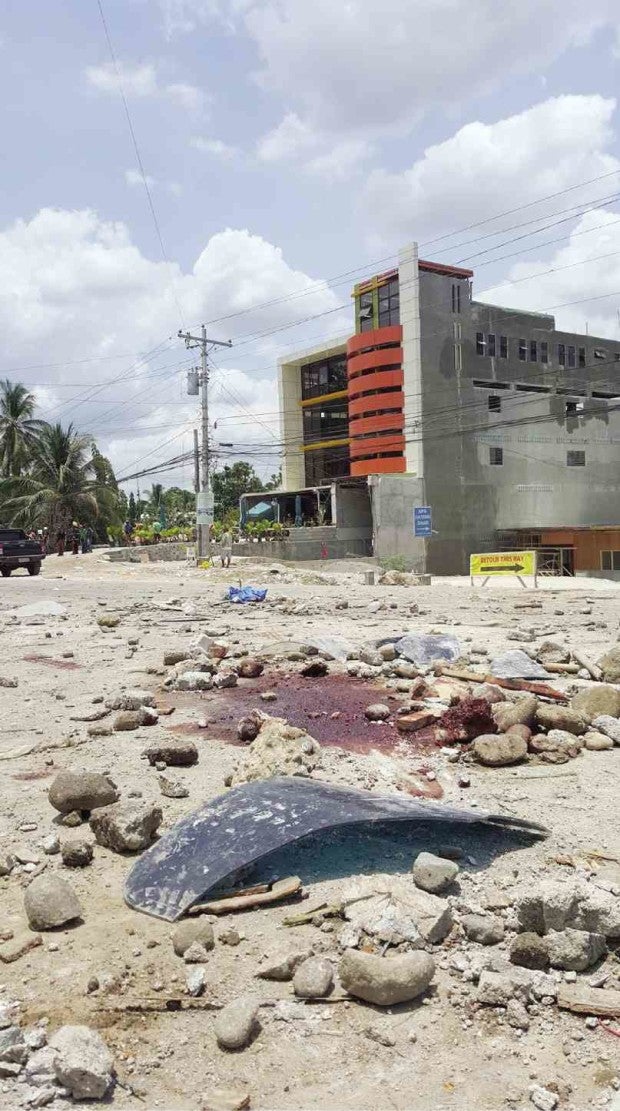 SHIELD AND ROCKS Part of a police shield and rocks are all that remain of the farmers’ protest action which was violently dispersed by police in Kidapawan City on Friday. JOHN PAGADUAN/CONTRIBUTOR

But instead of delivering aid, police on Friday stormed the protesters’ barricade and opened fire, killing two farmers and wounding 13 others.

What started on Wednesday as a peaceful protest by about 6,000 farmers from different parts of North Cotabato province, which had reported losses of over P1 billion due to the drought, ended as another potential crisis for the Aquino administration that  happened just weeks before  new leaders are chosen in national elections.

“A loud bursts of gunfire erupted,” Norma Capuyan, leader of the farmers’ group Apo Sandawa Lumadnong Panaghiusa sa Cotabato, told reporters. “There was heavy fire. We ran to a church compound and the police surrounded us.”

A farmer died on the spot and 13 others were wounded in the legs and shoulders, Capuyan said, adding the police first tried to disperse the protesters picketing the National Food Authority provincial office with water cannons but started shooting when the farmers held their ground.

But North Cotabato Gov. Emmylou Taliño Mendoza told a news conference that two protesters were killed and dozens of others, including policemen, were injured in the violence.

Mendoza claimed that the two protesters died from injuries they sustained when they were hit by rocks thrown during the melee and not from gunshots.

Militant groups identified only one fatality, Rotello Daelto of Arakan town, who witnesses claimed had raised his hands before an unidentified policeman fired at him, hitting him in the neck.

Pedro Arnado, vice president for Mindanao of the Kilusang Magbubukid ng Pilipinas (KMP), said Daelto was wounded in the initial volley of gunfire and was executed by a policeman.

“He was crouching while holding a wooden shield to protect himself from flying stones and sticks thrown by the cops. But his shield was broken into pieces, which made him look up. I saw how a rifleman on top of a truck take aim and press the trigger. The bullet made a clear hole in his neck,” Arnado said.

He said Daelto fell on his knees and raised his hands in surrender but a policeman carrying a shield walked up to him and shot him, hitting him also in the neck.

“I will never forget this scene. He slumped to the ground and died,” Arnado said.

He said Sheena Duazo, secretary general of Bagong Alyansang Makabayan (Bayan), was among the wounded, although he could not identify all the others injured in the police assault.

Ariel Casilao of the peasant  group Anakpawis said most of the wounded were taken to Kidapawan Doctors Hospital and Midway Kidapawan Hospital.

Candidates in the May 9 national elections and lawmakers condemned the violent dispersal of the protesters and blamed the government for failing to help the farmers affected by drought.

But Malacañang defended President Aquino from the criticisms. Presidential Communication Secretary Herminio Coloma Jr. said the government had been “implementing El Niño mitigation measures on many fronts since last year.”

“Accountability is being established and appropriate sanctions will be meted out if justified by the findings of the investigation,” he said.

The Philippine National Police said it had opened an investigation into the incident.

Chief Supt. Wilben Mayor, spokesperson for the PNP, said investigators were “consolidating all information” about the dispersal of the protesters.

“In the spirit of thoroughness and fairness, a complete and accurate narrative must be constructed,” he said.

Mayor said two policemen were injured and were in “critical condition due to head trauma, reportedly due to attacks initiated from the crowd.”

He assured the public, however, that “any violation of PNP rules and regulations shall be meted the appropriate penalty.”

“We are committed to holding anyone responsible for this tragic incident accountable,” Mayor said.

In a statement issued later, the PNP said 40 policemen were injured in the incident. The statement also claimed the farmers started the violence.

Governor Mendoza told the Inquirer that violence broke out after the farmers attacked policemen who were serving an order to clear the highway.

Mendoza said social workers accompanied the policemen to “rescue” minors from the barricade.

She said the protest became a police matter because the farmers’ permit “was only for Monday.”

The policemen gave the farmers “five minutes to vacate” the area, she said.

“While the police were trying to rescue the children, the protesters started throwing stones at them. At least 20 policemen sustained wounds from the rocks. And then a gunshot was heard and a policeman reportedly got hit,” she said.

Mendoza said she did not want to bring politics into the incident, but her election rival, former provincial Gov. Emmanuel Piñol, was there and had an interview, claiming that presidential candidate Rodrigo Duterte, the mayor of Davao City, would be there on Monday.

“The wounded policemen are now being treated at the hospital while we are also giving the same level of medical attention to the wounded protesters,” she said.

Mendoza said she had offered to have a dialogue with the farmers, but they rejected it, asking her instead to come to the picket line.

She also denied that the provincial government was remiss in its obligation to the farmers, but said she was following procedures.

“The funds are here but we have to follow a process. In fact, we are about to distribute rice to them in the coming days with the Department of Agriculture,” she said.

“Why did it take so long? Because we have to validate who are our constituents,” Mendoza said, adding that not all the protesters were from North Cotabato.

She said she was appalled at how the protest turned into violence.

Catamco said that while the incident was well within the jurisdiction of the provincial government, “I will nevertheless inform our national leaders about this unfortunate event.”

“President Aquino is accountable for the violent dispersal of the farmers’ protest in Kidapawan City,” Arnado said. “We strongly condemn the heinous violence against drought-affected farmers demanding food aid and immediate government assistance.”

“This violence against farmers and lumad people is a mark left by the Aquino administration,” KMP chair Rafael Mariano said in a statement.

Mariano said he was saddened that “farmers were demanding food and land but the haciendero government responded with bullets.”

The women’s group Gabriela alleged that the calamity funds for farmers could have been diverted to the campaign of administration candidates in the May 9 national elections.

Ali Indayla, spokesperson for Gabriela in Mindanao, said the provincial boards of North Cotabato and South Cotabato passed resolutions in January and March declaring the provinces under a state of calamity.

“Farmers fear that the calamity funds are now being used by the administration party to bolster the bid of administration candidates [who] are consistently [at] the tail end of surveys,” Indayla said.

Gabriela Rep. Emmi de Jesus said her group was holding President Aquino, Governor Mendoza and the PNP “responsible” for the deaths of the two farmers and the wounding of the other protesters.

The National Union of People’s Lawyers (NUPL) vowed to prosecute those responsible for the incident.

Edre Olalia, secretary general of the NUPL, said his group would work with its affiliate, the Union of People’s Lawyers in Mindanao, to build a case against the policemen who opened fire on the protesting farmers.

“We will coordinate with our Mindanao lawyers to get the whole facts and circumstances,” Olalia said in a text message. With reports from Nikko Dizon, Jaymee T. Gamil and Tarra Quismundo in Manila