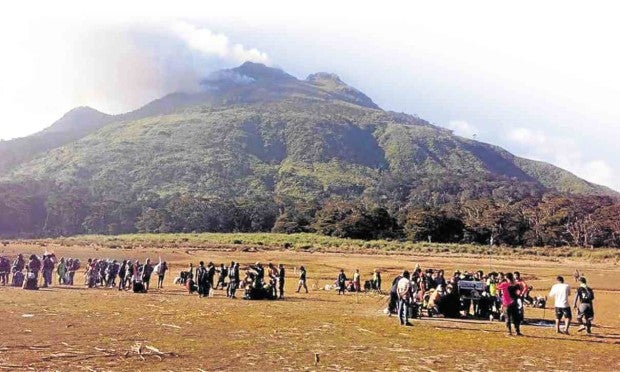 VOLUNTEERS tapped to help put out a fire on Mt. Apo assemble near the foot of the country’s tallest peak as smoke from the raging fire billows in the horizon. ORLANDO DINOY/INQUIRER MINDANAO

Authorities are looking at this option to allow the country’s tallest peak to heal in the wake of a fire that continues to rage and has so far destroyed at least 300 hectares of grasslands and forests.

The proposal was first made by North Cotabato officials. Kidapawan City Mayor Joseph Evangelista has given an order to close the Kidapawan trail to Mt. Apo.

In Davao City, Roberto Alabado III, the regional director of the Department of Tourism in Southern Mindanao, said the proposal is acceptable to him.

“Our focus is mainly for sustainable tourism,” said Alabado. “We have to consider the carrying capacity and the health of the environment before we encourage tourism activity in the area,” he said.

He said, though, that there is no decision yet whether to proceed with the Mt. Apo Boulder Challenge,  a race to the mountain peak that is scheduled late this month.

Alabado said mountaineers “are crying.” “It is too painful,” he said.

Instead of pushing through with the race, Alabado said race organizers “may have to find some way for people to take action to rehabilitate the forest, to heal the wounds of the mountain.”

The effort to put out the fire is continuing with several volunteers reported to have suffered from slight injuries when military helicopters dumped water, and skin irritation when they got too close to the fire.

Camoro said operations to establish a five-meter wide fire line on the Davao side of Mt. Apo continue.

“We have to create more fire lines,” he said.

Fire lines, he said, are among the measures being taken to prevent the fire from further spreading as two more fires have been reported on the Davao side while the one in Kidapawan City has rekindled due to strong winds.

Joey Recimilla, Kidapawan City tourism officer, said the effort to put out the fire has grown bigger especially in the wake of a report by the Protected Areas Management Board saying that damage from the early days of the fire is bigger than what was initially reported.

Camoro said volunteers were told to wear masks at all times because of the fumes. “It is carbon monoxide,” he said.

He said while the fire has stopped in some parts of the mountain, the work is far from over.

The fire, which has eaten up forests in parts of North Cotabato, Davao del Sur and Davao City, started on Black Saturday and was believed to have been triggered by campers.

Alabado expressed fear that the fire would further spread to forest areas in Davao del Sur and Davao City.

“We need all the help because the fire is now eating up part of our forests,” said Alabado.

He said areas in the North Cotabato side of the mountain that have been burned “consist of grasslands and flat lands.” “But here, we have real forest lands,” he said.

The environment group Interface for Development Intervention also urged the Davao City Watershed Management Council to draw up a quick reaction plan to prevent the fire from wiping out the remaining dipterocarp forests on the Davao City side of Mt. Apo. Orlando Dinoy and Germelina Lacorte, Inquirer Mindanao