Roxas offered to resign as Interior chief at height of Mamasapano 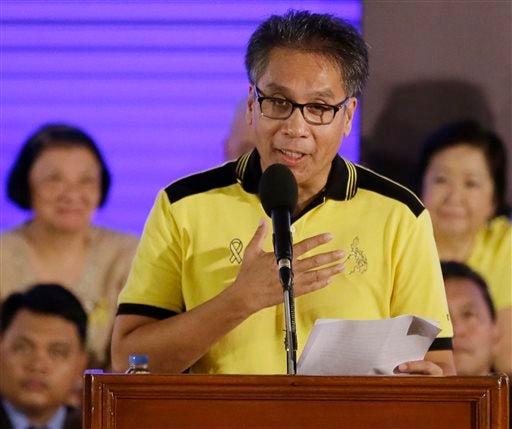 Roxas shared the information during a presidential forum with businessmen in Makati City.

He said that he offered to resign from his post on two occasions.

“Well, I did resign. I did offer my resignation, at least, on two occasions. President Aquino was surprised when I did that. Then I said. ‘Well, you know, if you have no more confidence in me–‘ [He said] ‘No, no. I thought that you knew. And, in fact, I ordered them to tell you no.'” Roxas said.

“You know what’s the hardest thing for me to take from Mamasapano? It’s not the snub. I don’t see it as a snub. The snub is about me eh. It’s like, it’s not that. It’s that 44 guys who fought for our flag went in an operation that– where they lost their lives. And it could have been prevented had there been their coordination,” Roxas said.

When pressed by reporters after the forum whether he offered his resignation through a letter or through verbal means, Roxas did not provide any further details.

Instead, he said that the main reason why he met with businessmen was to present his plans for the country’s economy.

On the campaign trail, the issue of Mamasapano still hounds Roxas.

During the second presidential debate in Cebu last March 20, Senator Grace Poe asked Roxas if his supposed lackluster performance in the Aquino Cabinet was the reason why he was kept in the dark in the planning and execution of the Mamasapano operation. Roxas maintained then that he was bypassed. JE

READ: Roxas on Mamasapano probe: ‘I have nothing to hide’