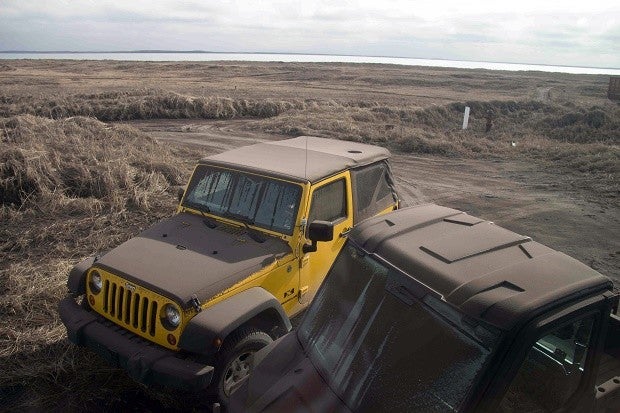 This Monday, March 28, 2016, photo provided by LJ Taylor shows volcanic ash on vehicles at Nelson Lagoon, Alaska. The Alaska Volcano Observatory says minor amounts of volcanic ash from Pavlof Volcano are being reported on the ground by several Alaska communities. Geologist Kristi Wallace of the US Geological Survey says the most significant fallout was in Nelson Lagoon. LJ TAYLOR VIA AP

ANCHORAGE, Alaska — A village not far from an erupting Alaska volcano urged residents to stay indoors after the mountain rained down ash, coating ground areas and turning some rooftops and car windows black.

The volcano kept pumping out new ash Tuesday that could threaten aircraft, but it came in smaller amounts at lower heights, according to the Alaska Volcano Observatory.

Pavlof Volcano, 625 miles southwest of Anchorage on the Alaska Peninsula, erupted Sunday. The initial eruption continued for about 17 hours and put out an ash cloud that reached 37,000 feet.

US Geological Survey geologist Kristi Wallace said there were reports of a significant ash fall in Nelson Lagoon, a village of 39 people about 55 miles northeast of the volcano. Residents reported one-eighth to two-thirds of an inch of ash.

“It was raining ash for a little bit,” Taylor said. “It turned everything black, the rooftops, the fuel tanks, homes.”

The ash was worse Tuesday, he said, because wind coming in off the ocean was whipping it around.

Officials say ash can be hazardous to eyes, skin and breathing passages.

The community has put out a health advisory to stay inside until Wednesday. Taylor is hoping strong wind or rain will sweep some of the ash away.

“I actually saw an eagle land on the grass today, and as he landed, a big pile of ash came up and flew away,” he said.

The plume blew northeast and by Tuesday had reached Canada, but Dave Schneider, a USGS geophysicist at the observatory, said activity had calmed from the continuous eruptive phase.

“Over the last six to eight hours the activity is more intermittent,” he said Tuesday. “There are short duration, small explosive events that are occurring, as opposed to sort of a continuous plume.”

“The extent of the plume is certainly greater but the concentration of the ash is becoming less,” Moore said. “The plume is becoming thinner over time.”

Volcanic ash is angular and sharp and can cause a jet engine to shut down. Alaska Airlines canceled 41 flights within the state Monday, and 28 more Tuesday.

Sherry Keever has lived in Healy, Alaska, for only a year and was trying to get home from a vacation in California when ash from the volcano prompted the cancellation of her flight.

“I’m kind of new, and I wasn’t even aware there were volcanoes that could affect the flight patterns, and I’m OK with it,” she said while sitting in a waiting area of Ted Stevens Anchorage International Airport, waiting to see if she could get her flight to Fairbanks on Tuesday.

The volcano in the 8,261-foot mountain is one of Alaska’s most active. It has had 40 known eruptions.

Pavlof eruptions in the past 20 years have not been as intense, but the current eruption is not unprecedented for the volcano, Schneider said.

The length of the eruption was a major factor in the size of the ash cloud, Schneider said. So were the winds and possibly the smaller size of the ash, which takes longer to fall out of the atmosphere.

Pat Walsh, a wildlife biologist for the Togiak National Wildlife Refuge, saw ash 25 miles west of Dillingham as a gray haze as he tracked wolves from the air in the refuge. He could also see traces of ash in fresh wolf tracks and in the snow.

Tisha Christensen, a health aide at the clinic in Port Heiden, said gray ash mixed with snow fell Monday night in the community on the Bering Sea side of the Alaska Peninsula. It affected her 8-year-old son, who has asthma but tried going to school Tuesday.

“He didn’t even make it a half-hour and had to come home and have a nebulizer treatment,” she said.

Only trace amounts of ash had been reported from Pavlof eruptions since 1996.

In the past, the volcano has erupted intermittently over months or shut off abruptly.