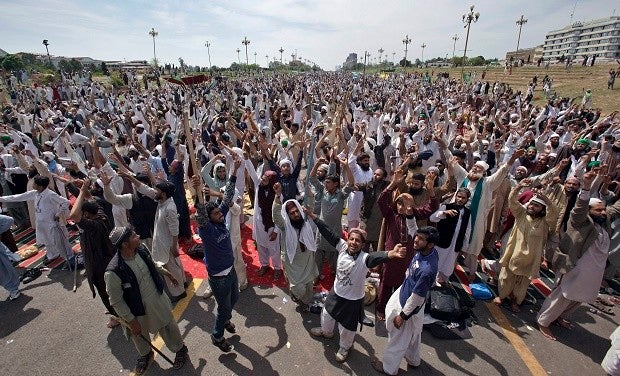 Protesters from Pakistan’s Sunni Tehreek group chant slogans during a sit-in near the parliament building in Islamabad, Pakistan, Tuesday, March 29, 2016. Hundreds of Islamic extremists who earlier violently protested in Islamabad over the hanging of a man who killed a secular governor continued their demonstrations in Pakistan’s capital on Tuesday, bringing the most sensitive parts of the capital to a standstill. AP

ISLAMABAD — Pakistan’s interior minister has warned hundreds of radical Islamists rallying for the past four days in central Islamabad to disperse peacefully and end their protest within hours.

The minister, Chaudhry Nisar Ali Khan, said late Tuesday that if the Islamists fail to do so, the government would disperse them by force.

The rally turned violent on Sunday, when more than 10,000 Islamists from Pakistan’s Sunni Tehreek group descended on the capital to denounce last month’s hanging of officer Mumtaz Qadri for the 2011 murder of secular Gov. Salman Taseer who had campaigned against Pakistan’s harsh blasphemy laws.

Since the start of the rally, the crowds have dwindled down to about 1,200 people. The protesters also demand the hanging of a jailed Christian woman whom Taseer had defended against blasphemy allegations.