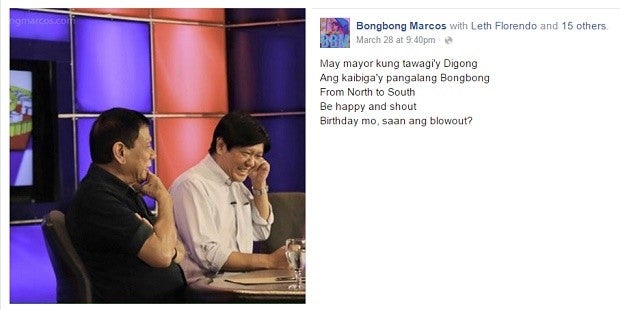 On his official Facebook page, Marcos posted the poem on Monday night, the 71st birthday of Duterte.

From North to South

Be happy and shout

Marcos, who is running with Sen. Miriam Defensor-Santiago, was once hopeful to be Duterte’s tandem but the Davao strongman picked Sen. Alan Peter Cayateno.

Several groups are still backing a Duterte-Marcos tandem, however, the Partido Demokratiko Pilipino (PDP) Laban has issued orders for its members to support Cayetano.

Marcos said that should he win as vice president, he is ready to work with any elected president, including Duterte, whom he once described as one of his “longtime bestfriends.”

Duterte’s father was a member of the cabinet during the time of the late dictator President Ferdinand Marcos.

Duterte says Marcos was the brightest of them all