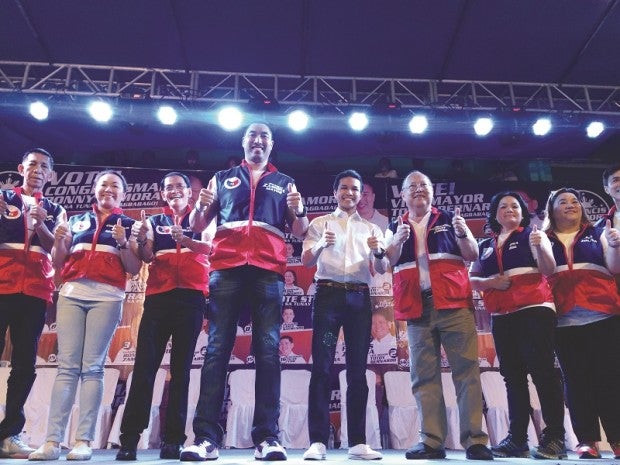 FOR MOM Brian Poe-Llamanzares (in white shirt) joins San Juan Vice Mayor Francis Zamora and Rep. Ronaldo Zamora (fourth and sixth from left) onstage Monday night for the father and son’s proclamation rally, together with other allied local candidates in the May 9 elections. Jovic Yee

On the night presidential candidate Sen. Grace Poe received an endorsement from reelectionist Manila Mayor Joseph Estrada, she also got the express support of the Estrada family’s political ally-turned-nemesis, the Zamoras of San Juan City.

But since Poe was in Manila for Estrada’s proclamation rally, it was her son Brian who went onstage to formally thank the Zamoras on Monday night, addressing a crowd of around 2,000 on behalf of his mother.

The 24-year-old Brian enumerated his mother’s programs as a Presidential wannabe: the continuation and expansion of the 4Ps (Pantawid Pamilyang Pilipino Program), the reduction of income tax, and free lunch for public school pupils, among others. He also harped on his mother being an independent and the only Palace contender who hails from Greenhills, San Juan.

But while he drew applause during the Zamoras’ proclamation rally in Barangay Kabayanan, Brian took a bashing on social media over the lingering issue of Poe’s nationality and that of her family.

Reacting to Brian’s statement that his mother, once elected, would immediately form a commission that will look into tax reforms, Twitter user @Negastarr asked whether that panel will be “in the Philippines or in the US of A?”

“It’s normal for Brian Poe not to know what he’s talking (about). After all he is a US citizen,” @ferdspal said.

“Hi Brian! Sinung iboboto mo, (who are you voting for?) Clinton or Trump?” @RodmyrDatoon said.

Brian also actively campaigned for his mother when she ran for senator in 2013, but this kind of heckling hardly hounded them back then.

At Monday’s program in San Juan, Brian finished his speech without directly endorsing his hosts, Vice Mayor Francis Zamora and his father Rep. Ronaldo Zamora. The younger Zamora is challenging the incumbent Mayor Guia Gomez (mother to Estrada scion Sen. JV Ejercito), while the elder is seeking another House term against another Estrada clan member.

Brian just reminded the audience that he is a nephew of Francis, whose wife Keri is a cousin of Brian’s father, Neil.

Sought for comment regarding the Poe camp’s apparent tiptoeing on who to support in San Juan, Francis Zamora said what is clear is that the Zamoras are supporting Poe while the Gomez camp is backing the administration candidate, Mar Roxas.

“It’s up to you to read between the lines and analyze the situation. I don’t think Brian will go here just for the sake of going here,” Zamora told reporters. “We are showing our support for Grace Poe and [his] coming here is a show of support for us.”

The Zamoras and the Estradas parted ways last year after the former alleged that their longtime political allies dumped them to give way to the candidacies of Councilor Janella Estrada and former Councilor Jana Ejercito, who are running for vice mayor and congresswoman, respectively.

For Francis Zamora, the 2016 elections may be the toughest political battle for the Estradas. “They are fighting two fronts—in San Juan and Manila. When you become too greedy, everything can go crashing down,” he said.