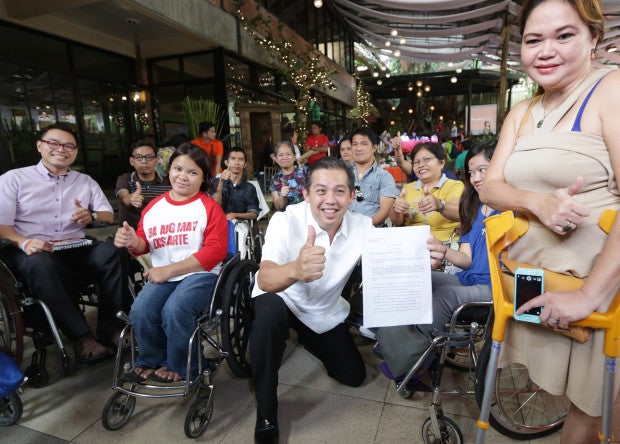 More than a million disabled Filipinos will finally enjoy tax exemptions at par with the perks granted to senior citizens, maximizing the benefits that they deserve under the law.

“From the bottom of my heart, I thank the President for signing this very important measure into law. This is a compassionate measure aimed at helping the plight of the PWD sector,” Romualdez said in a statement on Tuesday.

The bill was ratified in the House and Senate last December and transmitted to Malacañang on March 2.

Fear of a veto

PWD groups earlier expressed concern that the bill might suffer the same fate as the proposed P2,000 pension hike for Social Security System pensioners, which was vetoed by Mr. Aquino because of its financial implications.

The Philippine Statistics Authority has estimated the PWD population in the country at 1.5 million.

Like senior citizens, PWDs are eligible for a 20-percent discount on medical and dental services; purchase of medicines in all drugstores; public railway, skyway and bus fares; admission fees charged by theaters, cinema houses, concert halls, circuses, carnivals and other places of culture, leisure and amusement; and all services in hotels and similar lodging establishments, restaurants and recreation centers.

But unlike senior citizens, PWDs had to pay the 12-percent VAT, which meant they were only enjoying less than half of the cash perks they were entitled to.

Romualdez’s House Bill No. 1039 sought to change that by exempting PWDs from the VAT just like senior citizens, with an amendment to Republic Act No. 7277, also known as the Magna Carta for Persons with Disability, as amended by RA 9442, which gave the PWDs the 20-percent discount.

“This is an equalizing measure because this will accord PWDs exactly the same privilege enjoyed by senior citizens, who are exempted from the VAT by virtue of Republic Act No. 9994,” Romualdez explained while campaigning among his congressional colleagues for the bill’s passage.

Aside from Romualdez, the other proponents of the bill are Marikina Rep. Miro Quimbo, and Senators Sonny Angara, Ralph Recto, Bam Aquino and Nancy Binay.

Apart from the tax perk, the PWD law will also allow PWD relatives up to the fourth civil degree of consanguinity or affinity taking care of the handicapped to claim a tax deduction of P25,000 in their annual income tax.

“We are grateful for Congressman Martin Romualdez, who has tirelessly fought for this law, and Senators Sonny Angara and Ralph Recto and to the President for signing into law the PWD Bill, RA 10754,” said National Federation of PWD President Manuel Agcaoili.