A new species of fish was discovered recently in Thailand by a team of scientists – and the fish can ‘walk like a human’ because of its potential to develop a pelvis.

The waterfall climbing cavefish Cryptotora thamicola , a kin of the favorite pet goldfish, can be found in the streams and waterfalls of Thailand. The newly-discovered fish possesses a unique skill different from other species of fish: it uses its two front and back fins to pull itself up at rocks as water abruptly flows over them, according to a report by CBC News. The cavefish can grow to 1.1 inches (2.8 cm), and is a blind, depigmented creature.

“They have fin structures unlike any fish that I have ever seen anywhere,” said Brooke Flamming, a biologist at the New Jersey Institute of Technology who governed the experiment, in a press release.

Flamming elucidated that the cavefish moves its fins just like how other four-legged tetrapods, composed of amphibians, reptiles, and mammals. The cavefish can climb up rocks just like salamanders, a lizard-like amphibian. On the other hand, it lacks multiple fingers in each of its limbs, hence differing from the ancestors of tetrapods.

The cavefish’s anatomy is astonishing to scientists as well – the pelvis and vertebral column of the cavefish bolsters its body weight against gravity and let muscles ‘walk’ freely.

This ground-breaking discovery is a vital key in analyzing how every fishes’ anatomy evolved after the transition from finned to limbed appendages during the Devonian period 400 million years ago.

Flamming and her team published their discovery in the journal Scientific Reports. 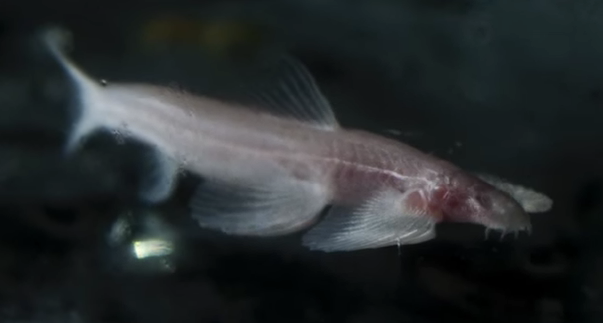