Transgender bet worries which ‘CR’ to use in House 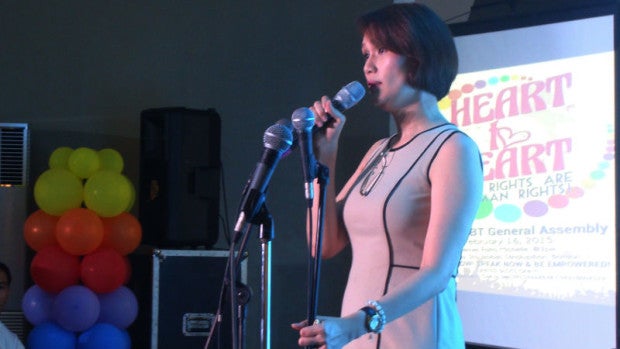 “My problem upon reaching Congress is which comfort room (toilet) I am allowed to use,” said Geraldine Roman, the daughter of outgoing Bataan Rep. Herminia Roman and the late Assemblyman Antonino Roman Jr.

Roman last week presented her campaign platform before local reporters. She champions gender equality and has promised to revive an antidiscrimination bill.

On Monday, she led a motorcade around Orani, braving the scorching sun and drawing curious glances from people who have heard about her gender change.

Roman said she was exerting all efforts to win on May 9. “I trust that you will accept me for who I am, no matter how others treat me. I will persevere,” she said.

During a meeting with the LGBT community in Dinalupihan town in February,

Roman said she did not care what people said about her sexuality “as long I don’t violate the rights of other people.”

Roman said she has lived as a woman for the past 22 years. She lived for a number of years in Spain where she got married to a Spanish citizen. Spain allows same-sex marriage.

Roman said she intended to file her own version of the freedom of information bill to ensure that all documents required for public works projects were accessible to the people.

“This is one way of avoiding irregularities in public works projects [because] some government officials connive with unscrupulous contractors,” she said.

“Public work projects should be done according to correct specifications and the right perspective to benefit the public, and not project contractors,” she said.

Roman is running against Hermosa Mayor Danilo Malana, a candidate of Aksyon Demokratiko. She is running under the Liberal Party of which her mother is Bataan chair.

Malana and Roman are both allies of reelectionist Bataan Gov. Albert Garcia, the chair of the National Unity Party (NUP), who is running unopposed.