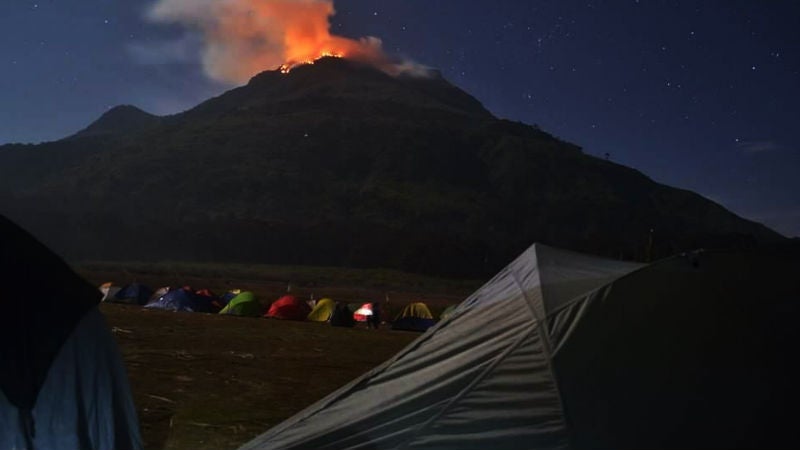 UNDER CONTROL Trekkers who evacuated Mt. Apo on Sunday watch from a safe distance smoke from the fire raging in the northwestern side of the country’s highest peak. The forest fire that started on Saturday has already been contained, according to city officials. RYAN MARK ASTURIAS/CONTRIBUTOR

KIDAPAWAN CITY—Volunteer firefighters built a 200-meter-long buffer line to contain the forest fire in the southwestern side of Mt. Apo, the country’s highest mountain and prime peak of mountain trekkers, in North Cotabato province.

But the fire was creeping in Apo’s northwestern side in Davao del Sur province, prompting authorities to concentrate their efforts in Sta. Cruz town and stop its spread toward Davao City’s Calinan District.

The Bureau of Fire Protection has yet to determine the cause of the fire, which has been raging in the majestic mountain shared by North Cotabato and Davao del Sur since Saturday afternoon. Apo, with an area of 54,974 hectares of land, was declared a natural park in 2004.

Janice Javellona, officer of the Municipal Disaster Risk Reduction and Management Council (MDRRMC) in Bansalan, Davao del Sur, said it might have been started by climbers who had set up a camp fire.

“The temperature on Saturday was negative 3. According to some of our rescuers, they received information that some climbers lighted a fire in front of their camp,” she said.

The fire started in the Kapatagan trail in Davao del Sur and spread to North Cotabato, according to Harry Camoro, action officer of the Provincial Disaster Risk Reduction and Management Council.

All 120 trekkers who used the Kidapawan trail have been accounted for and have safely returned to their places of origin. “They are all safe. None of them was hurt while going down the peak after the fire broke out,” said Joey Recemilla, Kidapawan city tourism officer.

At least 200 volunteers from the towns of Makilala and Magpet and this city were deployed in the base camp in Lake Venado to ensure that the fire would not reach the Kidapawan-Magpet-Makilala (KMM) ecotourism triangle.

“The KMM ecotourism triangle is now safe, but we are still on a tight watch, especially that the fire is still ongoing in the Davao side, and the wind direction keeps on changing,” Recemilla said.

He said the volunteers, armed with spades, rakes, bolos and chainsaws, conducted clearing operations and drew a buffer line to stop the fire from spreading to the remaining flora and fauna around the lake, and the 72-hectare reforestation area of Energy Development Corp. (EDC), which operates the Mount Apo Geothermal Power Plant in the North Cotabato side.

The buffer line is about 10 meters wide and at least 200 meters long. Recemilla said the volunteers cleared the peripheries of dried materials and cut some trees to build the fire line.

Local government units provided food and logistics to the volunteers who stayed at the base camp for almost two days since the fire broke out.

North Cotabato Gov. Emmylou Talino-Mendoza called on people responsible for the fire to be brave enough to come forward, as well as those with any information about the incident. “This would be helpful in identifying those who should be held accountable for this abominable act,” she said in a statement.

Kidapawan Mayor Joseph Evangelista has recommended the suspension of the Mt. Apo Summer Trek, saying all trails would be closed to climbers this summer to prevent a similar incident from happening.

It will take at least five years to rehabilitate the mountain, Evangelista said.

Bansalan had just opened a trail, which is nearer to the peak of Mt. Apo. But its mayor, Edwin Reyes, ordered the suspension of “Summer Climb 2016” even with the newly opened trail.

Almost 200 hectares of forest land had been lost along with its wildlife, said Alden Batal, the municipal tourism officer.

Edgardo Elera, Digos City tourism officer and acting officer of the Incident Management Team, said the forest fire in Bansalan had been contained as of Monday afternoon.

“We are now concentrating our efforts on the Sta. Cruz (town in Davao del Sur) side to prevent the fire from spreading towards Barangay Tamayong in Calinan, Davao City,” Elera said.

“They are equipped with handheld radios to provide the IMT base with relevant information which would be the basis for any possible action,” Taghoy said.