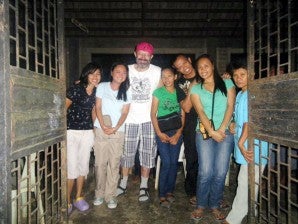 A KIND HEART Fr. Fausto Tentorio poses with volunteers during a medical mission in Mindanao. Photo taken from the Facebook account of A Coin from the Heart organization

Fausto Tentorio was the third member of the Vatican-run Pontifical Institute for Foreign Missions to have been killed since 1985 on Mindanao, a vast island home to Muslim separatists, Al-Qaeda-linked militants and other armed groups.

Police said an unknown gunman shot Tentorio, 59, eight times at his PIME parish in the remote farming town of Arakan in North Cotabato on Monday morning shortly before 8 as he got into his car.

Tentorio was to attend a clergy meeting in Kidapawan City when he was shot by a helmet-wearing man.

The priest was immediately taken to the Antipas Medical Specialist but was declared dead.

Arakan councilor Leonardo Reovoca told the Inquirer that some parish workers rushed out when they heard a series of shots and noticed the gunman walking to a waiting motorcycle.

“I cannot imagine it would happen to him. We don’t have an idea as to the motive of the killing,” Reovoca said.

Police said the assailant escaped and did not yet have any idea about the motive for the murder.

“We have no prior reports of any threat to the slain Italian priest,” provincial police chief Senior Superintendent Cornelio Salinas said.

Father Giulio Mariani, a spokesman for PIME’s regional diocese, said Tentorio arrived in the Philippines in 1978, a year after being ordained in his home country of Italy.

Mariani said Tentorio had dedicated his life to helping the local Manobo tribesmen and other disadvantaged people on Mindanao, a resource-rich but deeply poor island that makes up almost a third of the Philippines’ land mass.

“All these years he had worked with the tribal communities marginalized in Mindanao,” Mariani told AFP.

“He gave them dignity and he was very pastorally active among the poor.”

The Philippines is a mainly Catholic country but it has a Muslim minority population that regards Mindanao as its ancestral homeland, and a separatist insurgency there has claimed more than 150,000 lives since the 1970s.

Harder-line Islamic militants linked to Al-Qaeda, communist rebels and other armed groups also operate there, while political warlords are infamous for having their own private armies.

Mariani said Tentorio, like other missionaries in Mindanao, had received death threats and his murder may have been linked to his efforts in trying to help the tribespeople.

“Missionaries have always been the voice of the poor and, if you work on their behalf, sometimes you are bound to step on the toes of those who have other interests,” he said.

Mariani did not elaborate on the specific threats against Tentorio, or say if authorities had been told about them.

Founded in 1926, PIME missionaries work in 17 countries around the world, mainly in areas where there are conflicts and political turmoil, according to its website.

Mariani said there were at least 20 PIME priests in the Philippines, most of whom were on Mindanao.

In 1985 an armed militia working for the army shot and killed Tulio Favali whom they accused of working with anti-government forces on Mindanao, while another PIME priest was murdered there in 1992, according to Mariani.

Luciano Benedetti was held for nearly 70 days in 1998 by a group of men whom Mariani said identified themselves as Islamist guerrillas.

In 2007, Giancarlo Bossi, then 57, was abducted by a group of men believed to be Muslim rebels but freed after more than a month in captivity

“We are under threat all the time due to kidnappings, and other violence, but we are resigned to the idea that threats are part of our mission,” Mariani said.—With a report from Carlo Agamon, Inquirer Mindanao