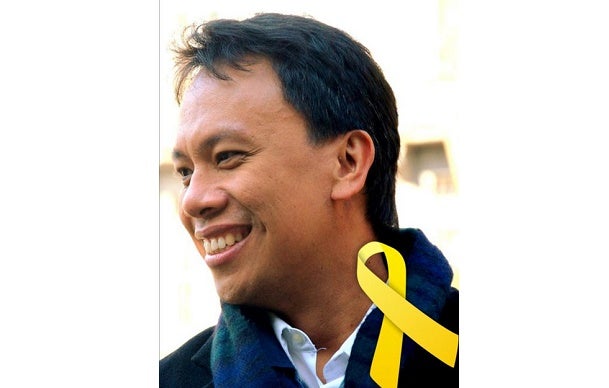 Presidential adviser on environmental concerns Secretary Nereus “Neric” Acosta was convicted of one count of graft by the Sandiganbayan for the misuse of his pork barrel funds when he was Bukidnon congressman.

READ: Palace expects Neric Acosta to submit to arrest | GET REAL: Who wants Acosta away from DENR?

Court records show that Acosta coursed P5.5 million of his Priority Development Assistance Funds to the cooperative in 2002.

He was sentenced to six to 10 years in prison and was perpetually barred from holding any public office.

Acosta, who holds a Cabinet position, is a member of the ruling Liberal Party of President Benigno Aquino III.

In an interview with reporters after the promulgation of the decision, Acosta said his graft conviction had nothing to do with his being a member of the Liberal Party and the Aquino Cabinet.

He said he had yet to talk to President Aquino about his conviction.

Acosta said he would study the court decision why he was convicted for one count but acquitted of the rest. He said he would file a motion for reconsideration on the Sandiganbayan decision.

Meanwhile, the Acosta matriarch Socorro was convicted of two counts of graft for causing undue injury to government and having financial and material interest in his son’s PDAF coursed to the cooperative.

She was sentenced to six to 10 years imprisonment as well as perpetual disqualification from public office for each count of graft.

Meanwhile, Secretary Acosta was acquitted by the court in two other cases of graft.

His first acquittal from graft involved allegation that he caused undue injury to government and committed manifest partiality, evident bad faith, and gross inexcusable negligence, when he in 2001 gave undue preference to Bukidnon Integrated Network of Home Industries (Binhi) by transferring a solar dryer tunnel purchased with his P2.5 million PDAF to his mother’s municipality for Binhi’s use. Acosta’s father Juan Acosta and aunt Ma. Nemia Bornidor were incorporators of Binhi.

Prosecutors claimed Acosta’s alleged act deprived the government the beneficial use of the solar dryer, which is deemed a public property.

His second graft acquittal involved allegation that he in 2001 caused undue injury to government and committed manifest partiality, evident bad faith, and gross inexcusable negligence, when he gave undue preference to Binhi when he coursed P2.5 million of his PDAF as financial assistance to Binhi using the Talakag municipality as a conduit.

The court said the prosecution failed to prove guilt beyond reasonable doubt.