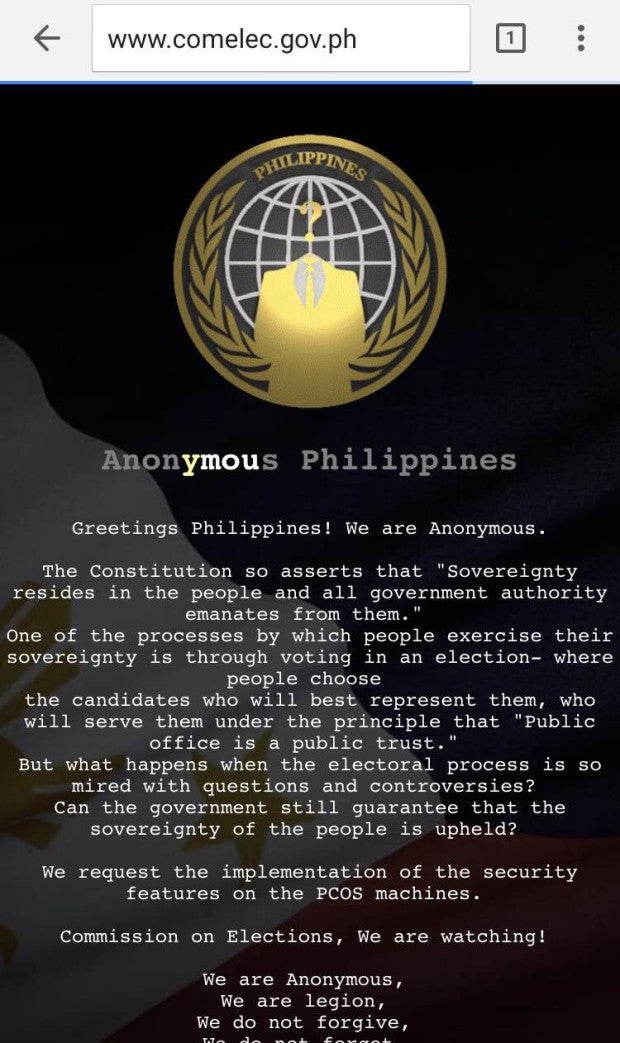 The website was hacked by the group Anonymous Philippines which asked the poll body to implement the security features of the Precinct Count Optical Scanner (Pcos).

The Comelec is now using vote counting machines or VCMs.

The group also hit the Comelec for the various challenges which it currently faces.

“One of the processes by which people exercise their sovereignty is through voting in an election- where people choose the candidates who will best represent them, who will serve them under the principle that ‘Public office is a public trust,’” the group said.

“But what happens when the electoral process is so mired with questions and controversies?” the group added.

“We request the implementation of the security features on the PCOS machines,” it added.

The Supreme Court (SC) on March 8 first asked the Comelec to implement the voters’ verified paper audit trail (VVPAT) on the VCMs.

In a 13-0 vote on March 18, the high court upheld its earlier decision, saying that the wording pertaining to the VVPAT “means that the voter himself or herself must verify the paper audit trail.”

“It is incorrect for the Commission on Elections to argue that the law does not require each voter to verify whether the vote-counting machines recorded his or her votes properly,” the SC said.

The decision of the high court has affected the preparations of the Comelec for the upcoming polls, saying that it may conduct the polls on May 23.