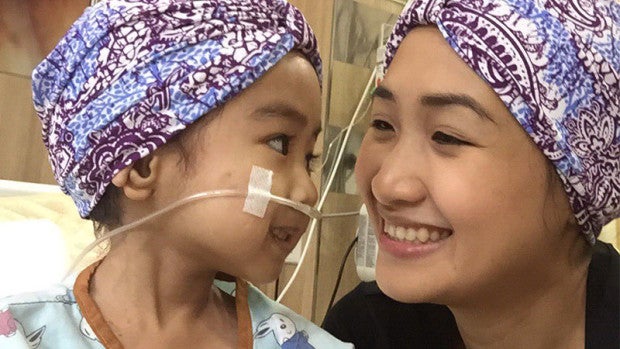 CAITIE Lucas, a model of fortitude and composure while battling a rare blood cancer, with her mother Feliz CONTRIBUTED PHOTO

THE BRUISES and wounds on 3-year-old Caitie Lucas’ frail hands and arms are more than just signs that she is fighting a disease that requires countless needle pricks and frequent trips to the hospital.

For her parents, Feliz and Jayjay, the marks on her limbs are also great reminders of Jesus Christ’s own wounds and the promise of redemption and healing.

“Before, I didn’t want to look at all the puncture wounds Caitie has on her wrists and arms. [But] I would always tell her to remember Jesus when he was nailed to the cross [and] had marks, too,” Feliz said.

“Hers, in time, will heal and these will be a great reminder of a greater testimony that Christ has given her at such a young age,” added the 30-year-old mother added.

Caitie was recently diagnosed with juvenile myelomonocytic leukemia (JMML) by doctors in Singapore. It is blood cancer so rare that it strikes only one in a million children in the United States and has no known treatment protocol.

Chronicled in “Courageous Caitie,” a Facebook page her mother set up, the young girl’s story of pain, bravery and faith has captivated thousands of people, restored friendships diminished by time and distance, and moved even strangers to come together and help the struggling family of four.

Her diagnosis came after an agonizing two months of fighting the condition in two prime hospitals in Manila, where she was seen by 33 doctors and underwent several excision biopsies, bone marrow aspirations, multiple blood extractions and transfusions but still didn’t get a definite diagnosis.

Early symptoms began in September last year in the form of lesions similar to mosquito bites suddenly appearing in her arms and legs. These were initially diagnosed as a simple case of allergic reaction to insect bites and later on as tuberculosis.

But three months later, Caitie’s symptoms worsened despite treatment for the infectious disease: Her skin lesions got bad, spreading to her face, and she developed abdominal pain, an enlarged spleen and liver, and chronic diarrhea.

After nearly two months of hospital confinement that began on New Year’s Day and the medical bills ballooned to P4.5 million, three times more than the family’s savings, without a concrete diagnosis, the Lucases took a leap of faith. They flew to Singapore on Feb. 21.

Seeking medical treatment abroad meant they had to temporarily leave behind their year-old son in the care of relatives and run their business remotely so they could still raise the amount needed for Caitie’s treatment.

Following their arrival in Singapore, Caitie underwent another battery of tests at National University Hospital, the city-state’s premier medical teaching institution. After 10 days, the couple finally got an answer as to what was ailing their little girl.

“Prior to the diagnosis, I didn’t question ‘why’ and I accepted whatever would come knowing it’s His best plan,” Feliz told the Inquirer. “Then came the diagnosis. I honestly asked why. I got angry and almost turned my back on [God],” she said.

“I cried why it had to be Caitie. Of all the diseases, why it had to be so rare [but] after crying my heart out in honesty to God, I got to process things and realized that the journey is still better with God in the picture than to turn [my] back on Him because with Him there is hope,” she said.

Rather than look at their daughter’s ailment as a curse or a punishment from God, the parents changed their perspective and slowly learned to appreciate the little miracles and blessings it brought to their struggling family.

“Instead of anger [and the question of] ‘why us?’ It turned to humility. ‘Why us to receive such a miracle?’ We chose to see the good in things,” she said.

Doctors were particularly amazed at how her daughter defied the odds on many occasions and how she was taking pain and suffering beyond her years, Feliz said.

Caitie also never resisted needle procedures and fasting, making work easy for her doctors and nurses. When in pain, she would merely ask her parents to hold her hands for comfort and distract herself with books and videos of her favorite Bible stories, like David and Goliath.

Despite being restricted by wires and drips, even at her lowest blood mark, Caitie would continue to make her confined environment bright and cheerful by keeping busy with colorful arts and crafts and painting, her current favorite hobby.

She also did not like passing up on simple tasks like going to the bathroom for a toilet break even during her worst bouts of diarrhea or buttoning up her hospital pajamas.

“She knows how to process pain. She would eat on her own, do things on her own. Even if she’s having a difficult time breathing, she would give her best and fix her clothes, talk and try her best to walk even if it was so difficult,” Feliz said.

The little girl also knew how to ask for divine help. The mother recalled that upon hearing earlier this month that she could continue treatment as an outpatient, Caitie inquired how she could go home with an IV plug.

The mother suggested that they pray. The little girl obeyed and implored, “Dear Jesus, please remove the wire so I can go home.”

“She is indeed more resilient than both of us. We get shattered immediately but her, it’s like nothing unusual … the Lord really sustains her. I guess, it’s God’s way of affirming that He has this and He has been faithful in all aspects,” she said.

The deluge of support and help from childhood friends, old classmates, churchmates, colleagues in the industry and strangers touched by Caitie’s example of fortitude and composure has also surprised and overwhelmed the family.

“Friends I’ve never seen since grade school would come and visit. Strangers pump breast milk in our room, give money, blood and just give anything and everything they can to help …. Groups that have been disconnected came together after years and teamed up to create fundraising events,” Feliz said.

Having a little girl unite these people to spread generosity and exercise selflessness was another thing to be thankful for despite their tough circumstance, she pointed out.

“I realized people are drawn to our story because we are genuine in showing our vulnerability—that we are weak, that we get angry too, that we question and we struggle. But at the end of it all, we choose God still,” Jayjay said.

In Singapore, the family’s daily needs were sustained by the generosity of Filipinos working there, who would bring them toiletries and homecooked meals daily, take care of their laundry, donate blood in the middle of the night or just give them comforting words, Feliz said.

Back home, various groups have voluntarily come up with a host of fundraising events—from marathon photo sessions and makeup tutorials to benefit dinners and garage sales—to come up with  P15 million for Caitie’s treatment, which includes splenectomy, cell therapy and a bone marrow transplant.

Local artists, young and old, have also joined the fundraising by putting up their works for auction online. Some friends have tapped the crowdfunding platform online GoFundMe, which raised nearly half of the total amount needed for Caitie’s treatment in just 24 days.

Feliz disclosed that earlier, the family had contemplated using its tithe to the church to defray hospital expenses but decided against it. “We wanted to put God first. I think because of it, God rewarded us and literally flooded us with His riches,” she said.

Caitie recently finished a short course of low-dose chemotherapy. In the next two to three months, she will be undergoing several other procedures that would bring her safely to a bone marrow transplant, the only treatment option for JMML.

“It’s risky, scary and more unknown but if God was able to supply all our needs and wants comfortably in all aspects and was able to sustain Caitie for six months since September [even] without diagnosis, then the next three months is an easy leg,” Feliz said.

She said the family would move forward one day at a time, pinning its hope on the restoration and joy that would come.

“Faith is not just walking on water. It’s knowing that the one whom you put your faith into has already walked on water. So what would stop us from following through?” Feliz said.